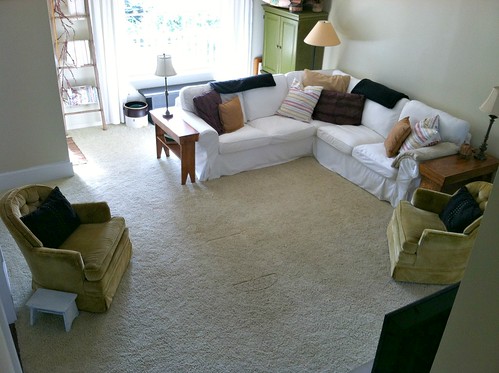 Now that our kitchen / dining room is finished (the butcher block counters are supposed to arrive later next week, and then I can show you some after pictures!) I’ve decided to FINALLY finish our living room… since we’ve been living here for almost 2 years now.

And by “finish”, I really just need to figure out what to do on the wall above our couch.

We have 9′ tall ceilings, which make the room seem nice and open, but they also make it harder for me to decide what to do above the couch. There’s just so much space to fill.

Plus we have plaster walls so I don’t want to put too many nail holes in (at least until I’m positive the nails will stay there for a while).

As you can see by the rest of the room, everything is very neutral (carpet, trim, walls, couch) and then I have accents of green, red, mustard, navy, brown, and black — so pretty much any color works in my house 🙂

I should mention that the two mustard-colored swivel rocking chairs will eventually get slip-covered, we’re just “testing them out for size” right now before I spend the money. 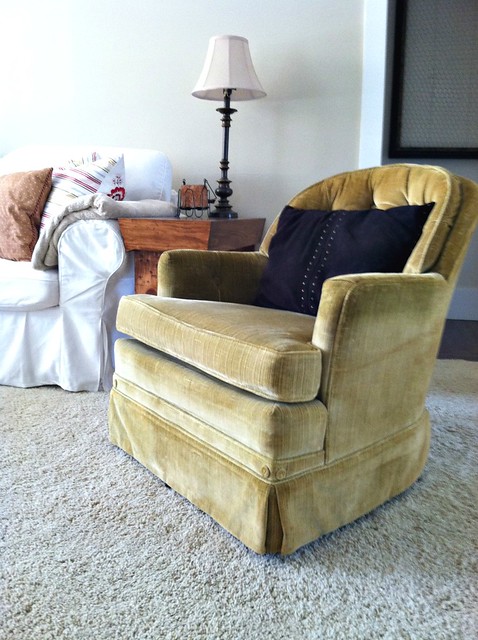 But aren’t they cute? $35 for the pair on Craigslist! 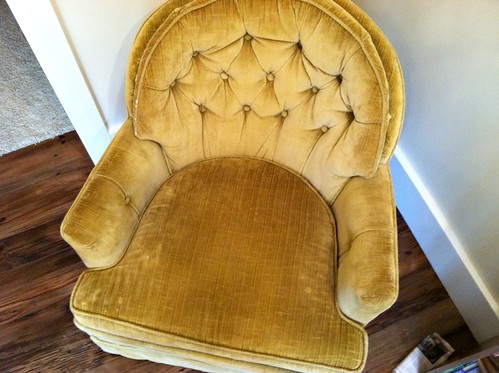 Anyway, back to the living room…

Here’s a bird’s-eye view of our living room — pretty much “to-scale”. You can click on the photo to enlarge.

UPDATE: After reading a few of the comments, I should mention that we are not interested in changing the layout of the living room. For the past two years we’ve been arranging, rearranging, and moving furniture — trying every option we can thing of — but we ALWAYS come back to the couch in this position. It makes our living room feel much larger, it gives Nora lots more room to move around, and it flows better with the rest of our house. Just trust me! Plus, Dave might shoot me if I ask him to move that couch one more time 🙂 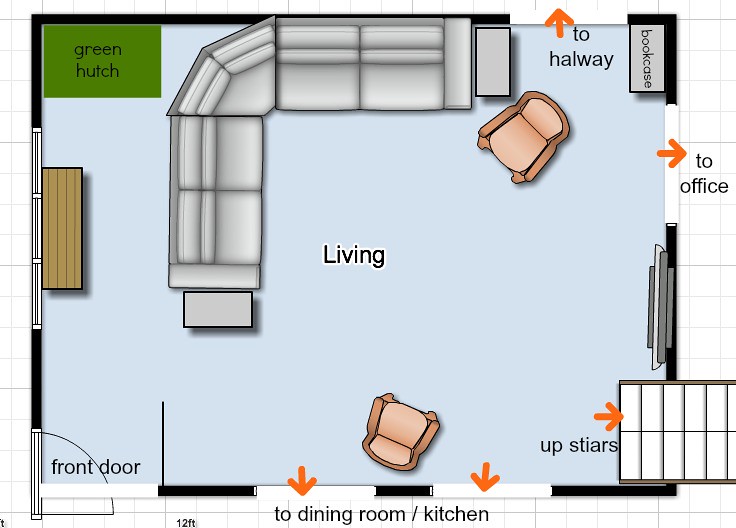 All the other walls are decorated, it’s just the wall above the couch that need something… a big something 🙂 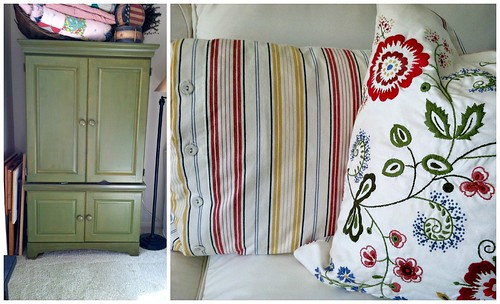 Also, now that we knocked down the walls between our living room, kitchen, and dining room, I’d like all the rooms to “flow” color wise. So here’s a picture of our dining room — hopefully I don’t spoil too much of our kitchen “reveal”! 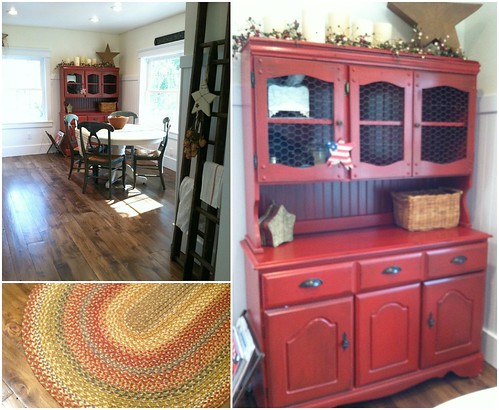 So lots of “warm colors”.

I’ve already thought about doing a picture collage… but I feel like I would need SO many pictures.

I’ve thought about hanging old windows or an old door… but not sure how that would look either.

I’ve looked through Pinterest and I’ve flipped through magazines.

And now it’s been TWO years of living with a huge bare wall above our couch!

Anyone want to come do this for me? I’ll pay you in baked goods!