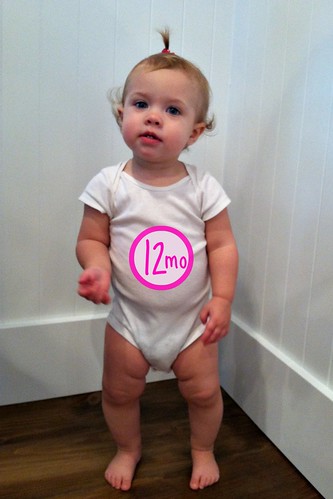 Today we’re celebrating Nora’s first birthday with both Dave and my immediate families. We’re having a cute {but totally NOT extravagant} party filled with pictures, presents, yummy food, delicious cupcakes, and lots of pink 🙂

I’ve already gotten loads of emails asking what I’m planning for Nora’s party… however, you’ll just have to wait another week or so for that post! Today, I’m sharing Nora’s 12 month pictures — which were extremely difficult to take due to cold weather outside, poor lighting inside, and an overly-active little girl! 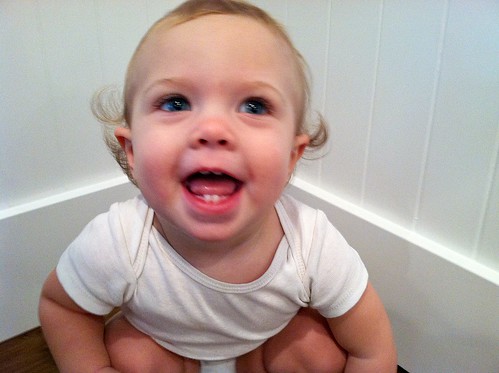 Her actual birthday was on Thanksgiving day, and since I wanted to write a special Thanksgiving post/poem, I decided to wait until today to share her 12 month pictures. Hopefully you can handel two Nora posts in one week 🙂

This girl is something else… she is smart but also stubborn, sweet but also sassy, adorable but also aggravating. She knows what she wants and if you don’t give it to her, she WILL have a fit. Oh, and she likes to do everything by herself {the apple doesn’t fall far from the tree, my friends!} 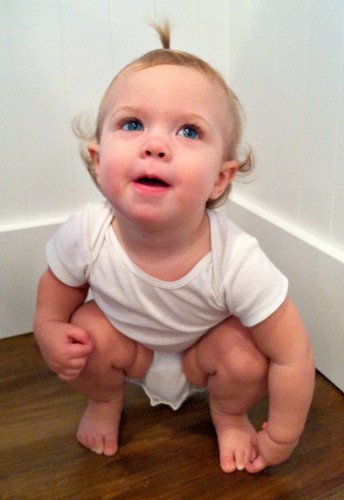 Here are some of her milestones from the past month.

1. She celebrated her first Halloween

And she was quite possibly the cutest nurse ever 🙂 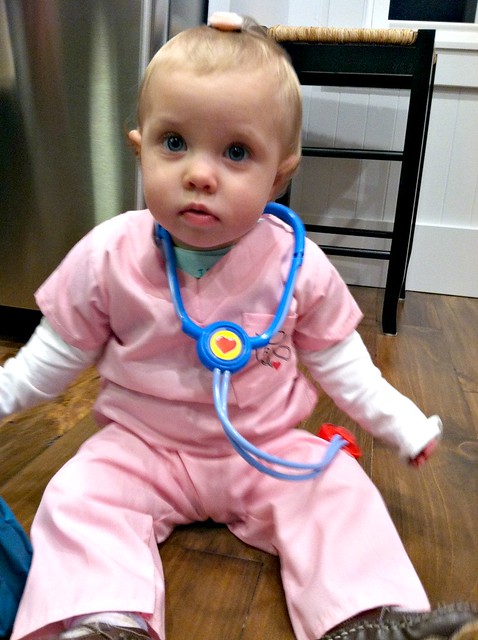 2. Her official first word is “no”

Although Nora is super “helpful” around the house… 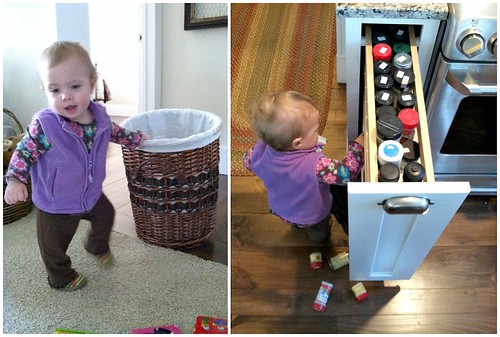 … she is also quite eager to say “no” or actually “nah” (which is officially her first word). For those of you who know Nora — this is not a huge surprise!

When we try to feed her, she says “nah” and pushes the spoon away.

When we pick up her toys, she says “nah” and pulls them back out again.

When I set her down and she wants to be held, she says “nah, nah, nah” and reaches up for me.

When she sneaks into the bathroom to unroll the toilet paper, she looks at me and says “nah nah”

When she grabs the remote control, she runs from me saying “nah nah nah nah”

When she grabs the toilet bowl brush, she says “nah nah” and the proceeds to shake it around until I can grab it from her

You get the idea 🙂

Seriously, how could something so sweet be so naughty! 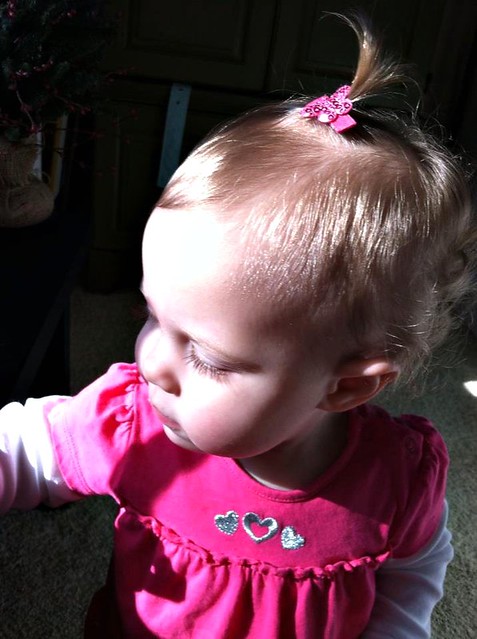 Enough with this walking business, Nora feels the need to run everywhere — which is pretty funny since her legs are so short.

Her favorite running destination is currently the bathtub 🙂

She can sit and look/point at photos on our phones, our computers, our walls, etc. all day long. She just LOVES looking at pictures.

She also LOVES music — so we often play CD’s and Baby Einstein DVD’s so she can dance… and she does dance! Even when the music for the NEWS or commercials come on, she’ll run to the living room and start shaking her arms!

Recently, I made a little photo collage in her bedroom using a yardstick and clothes pins (DIY post coming) and she just loves it.

The only problem is when I’m gone, she points at the pictures and cries — so said 🙁

5. She sleeps in a twin bed

You can probably see in the photo above that she’s standing on her bed… and yes, it IS a twin bed. She hasn’t slept in her crib since she was 6 months old — so sad, especially since I made all her cute crib bedding!

However, at this point, we really don’t care WHERE she sleeps, as long as she sleeps. So, she slept in her carseat from 6-10 months and for the past 2 months, she’s been sleeping in a twin bed on the floor of her room.

She loves it. She can climb in and out as she pleases and she’s honestly sleeping way better. She still only takes about one 20-30 minute nap per day (at the most) but she’s going to be much better at night and when she does wake up, she’ll either cry herself back to sleep or quickly fall back asleep once we go in there. Plus, now Dave and I have a place to lay when we have to go in there in the middle of the night.

It’s not perfect, but it’s working for us and we’re ALL more rested over here!

6. She still loves the outdoors

It’s getting colder — but thanks to friends who are letting us borrow puffy winter coats and snow suits, we’re still playing outside for multiple hours almost every day! 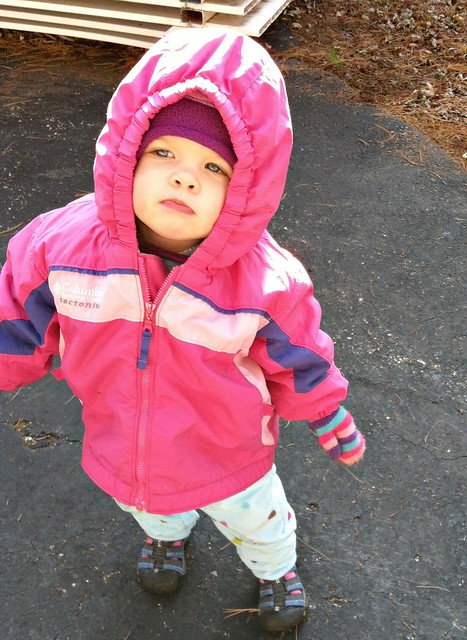 We also found an awesome (like-new) jogging stroller on Craigslist for $35 and Dave has been taking her for short runs after he gets home from school. Nora loves the extra outdoor time, Dave loves that he can do some exercising, and I love that I get the house to myself for a few moments! 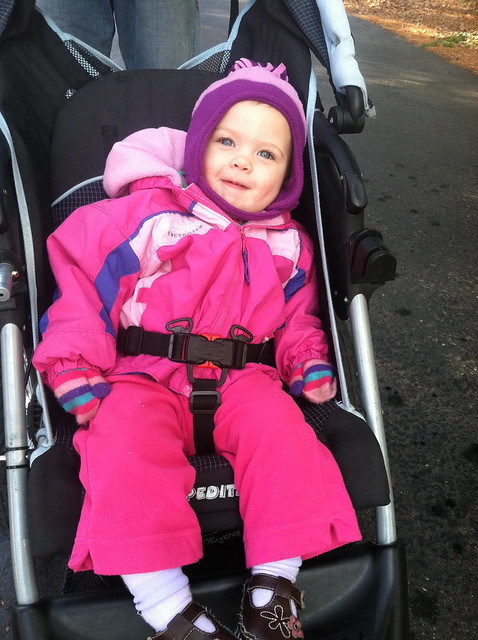 And the most exciting “outdoor news” of all is that Nora got a fabulous new-to-us swing set for her birthday.

We have since swapped out the middle swing for a baby swing and she is absolutely loving it! 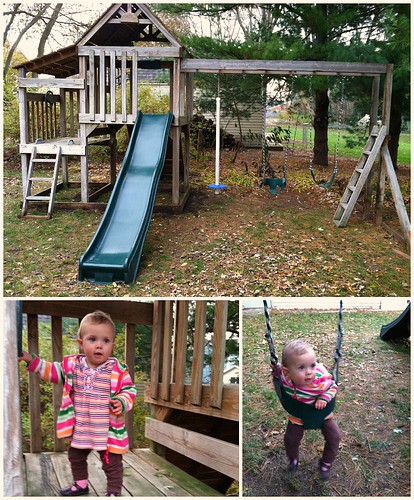 6. She was a champ for family pictures

We recently got family pictures taken  — and they turned out fabulous! 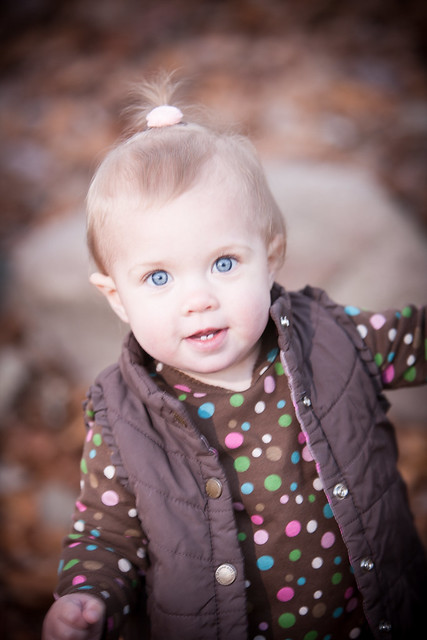 The photos were taken by Modern Photographics (the same people who took our wedding photos). I’ll be sharing more photos later, but these are two of my favorites 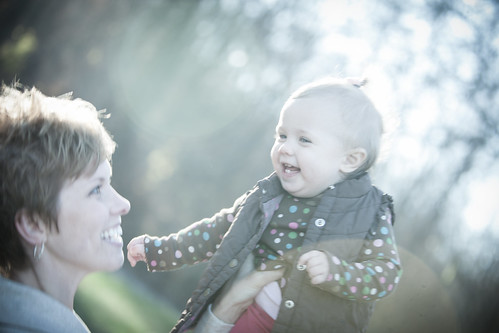 How big is Nora?

We measured Nora on our new growth chart Thursday morning… and she was exactly 30″ tall — which the doctors say is very tall for her age. 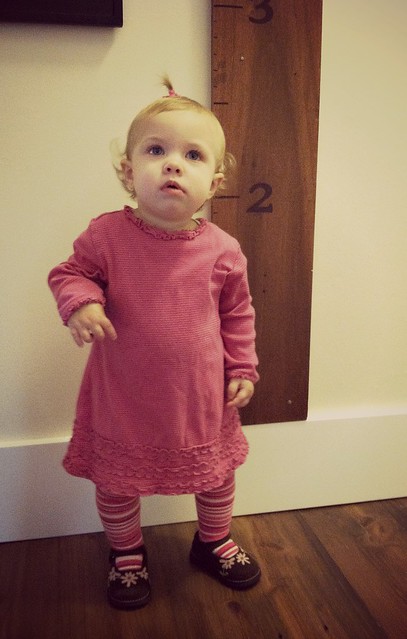 I feel like she changed so much this past month that I could go on and on with all her new milestones — but I won’t.

Instead, I’ll give you a quick look back at her previous month’s photos — you can click on the written numbers to read more about that specific month {and see lots more pictures}. 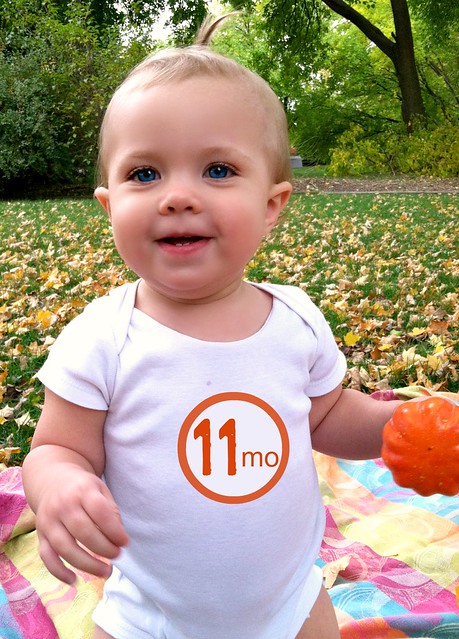 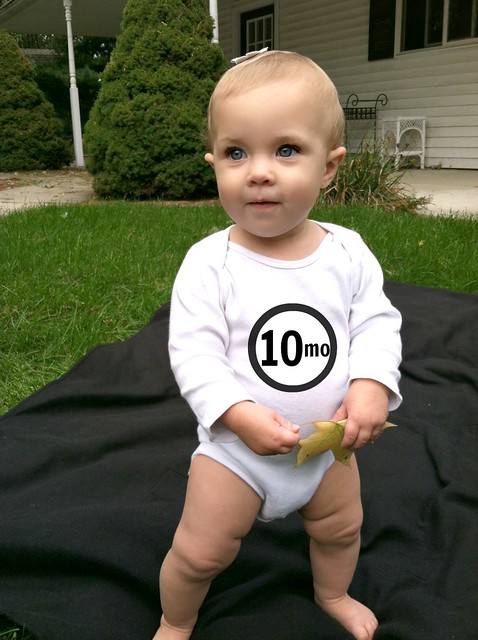 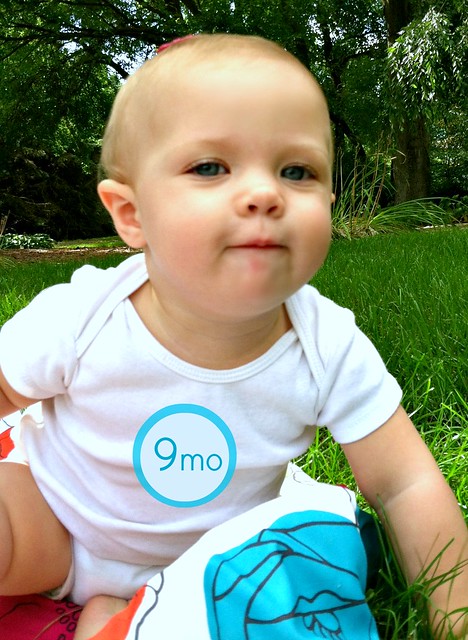 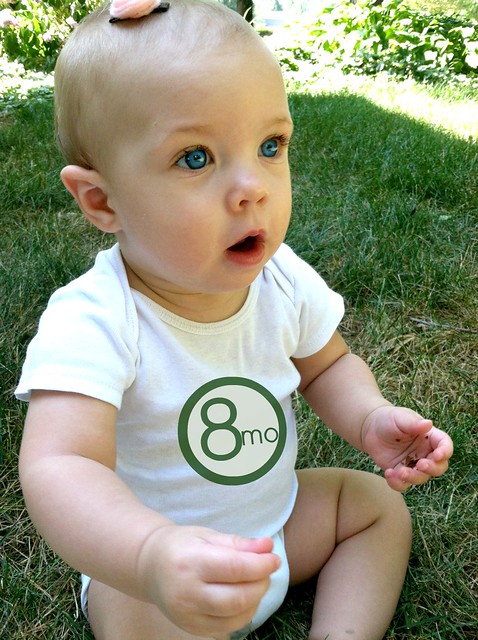 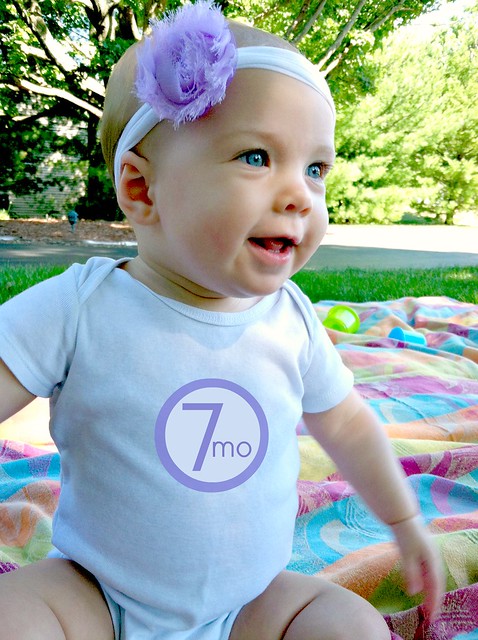 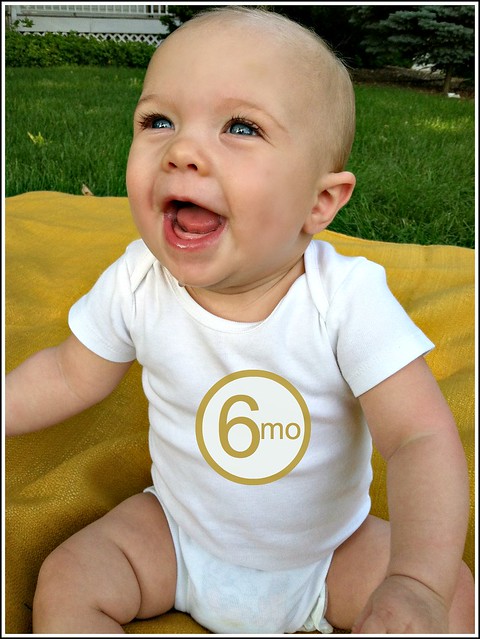 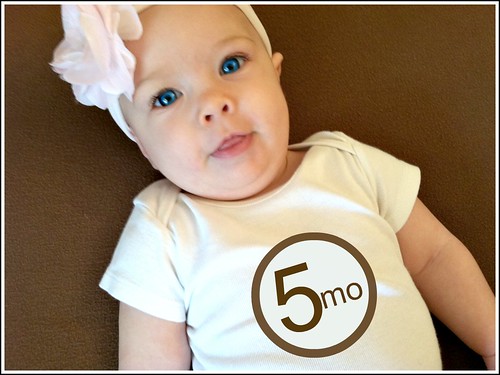 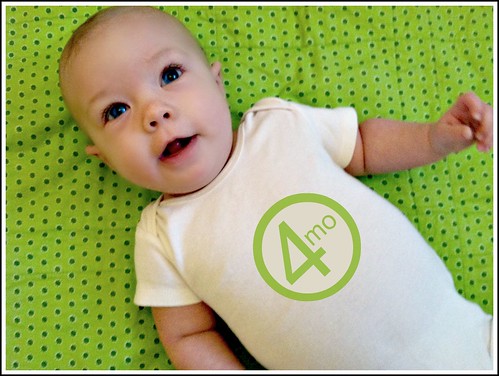 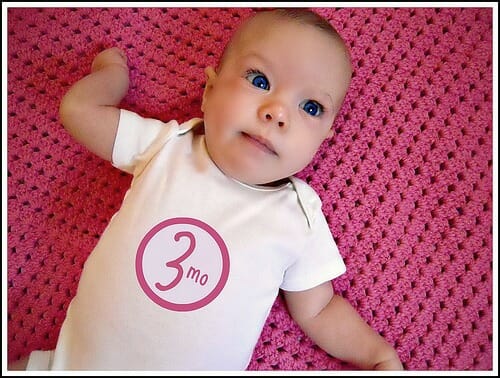 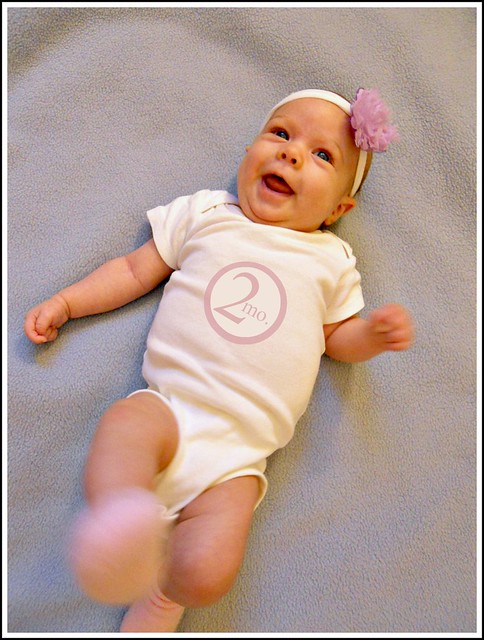 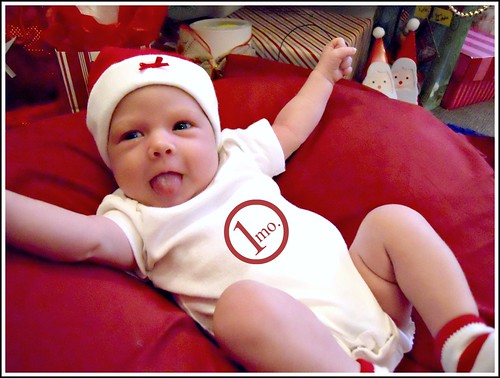 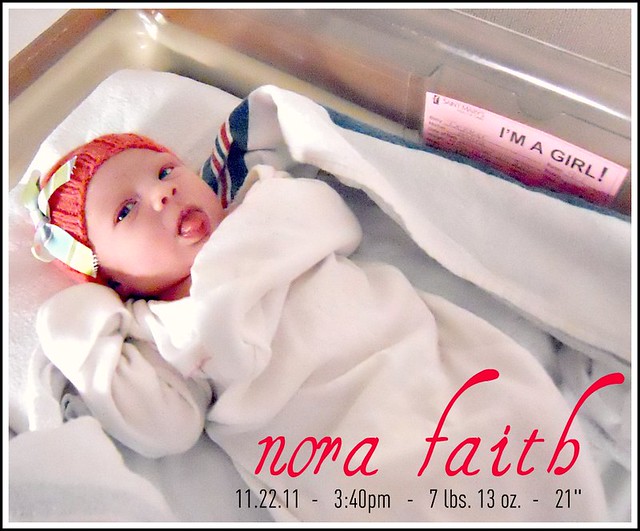 Yay — I actually followed through and took her pictures every month for a whole year!

I’m so glad I did this and can now look back to see her different milestones and cute monthly pictures {this was my alternative to a baby book}. Hopefully I’ll make the time to do this with future children as well 🙂

Oh, and if you’re wondering about the “numbered onesies” — I actually just use plain white onesies and add the colored numbers via a free photo editing program. Tricky, huh?! 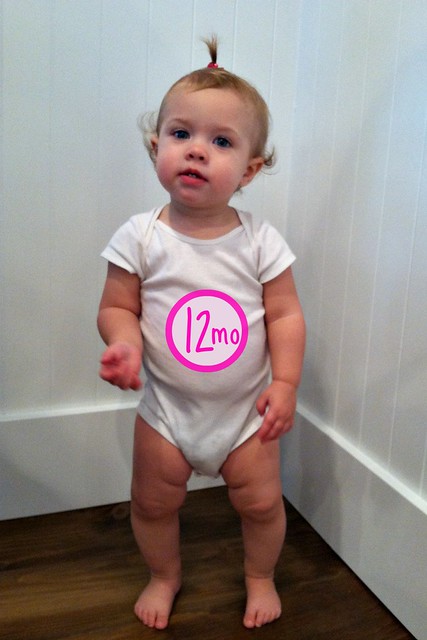