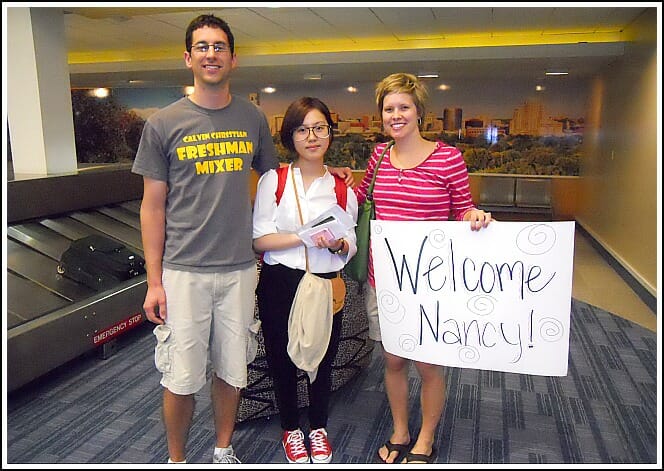 It’s been a week since our International Students arrived… and what a week it was!!

I’m SO appreciative of all the emails, phone calls, Facebook messages, blog comments, and “tweets” that you’ve sent my way over the past week. I’ve put many of your tips into practice already and soaked up every encouraging word! Thank-you THANK-YOU!!!

We picked Nancy up from the airport on Monday evening {see photo above}. She is 17 years old, from South Korea, and will be a Junior at Calvin Christian High School.

Sarah, a 15 year old girl from Vietnam, will be a Sophomore at Calvin Christian. She actually arrived several days before Nancy but stayed with her cousins (who live about 15 minutes from us) for a few days before moving into our house!

Now that they are both settled in, I can honestly say that most of the things I was worried about are not even an issue!

Dave and I were worried that we wouldn’t be able to communicate, but both Nancy and Sarah can understand everything we say; and for the most part, can communicate what they are trying to say as well. Nancy is a couple years older and has had more English training, so her grammar and pronunciation is actually quite good.

I’m certain that they will both be very shy and quiet the first few days of school, but once people start talking to them, they open up and can easily communicate. Praise the Lord!

I was REALLY nervous about the whole food aspect because even though I enjoy cooking and would consider myself a decent cook, I know nothing about Korean or Vietnamese foods — so I was hoping and praying they would like what I made!

We were told to make all the foods we would normally eat at first so they could get a chance to try things and figure out what they did and didn’t like. So, with the exception of Tuesday morning when I let them both eat Ramen Noodles for breakfast 🙂 here are some of the foods they have tried:

I’m pretty sure you can’t get more “American” than that menu!!

And even though they eat extremely small portions {both girls weigh less than 100 lbs} they have tried everything and I think they liked most of it! What a relief!

I was definitely more worried about this than Dave was, but I just wanted them both to like their rooms and have enough “private” space so they could relax and study. So, both girls have their own, good-size bedroom {which they seem to like} and they share a large bathroom and den area. Things are going very well and they already seem to have coordinated their bathroom routines!

Here are a few pictures of their space:

Den: there’s a TV in that cabinet. 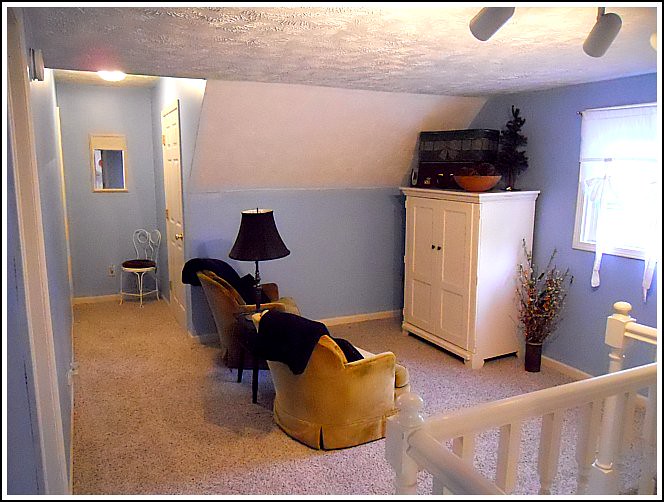 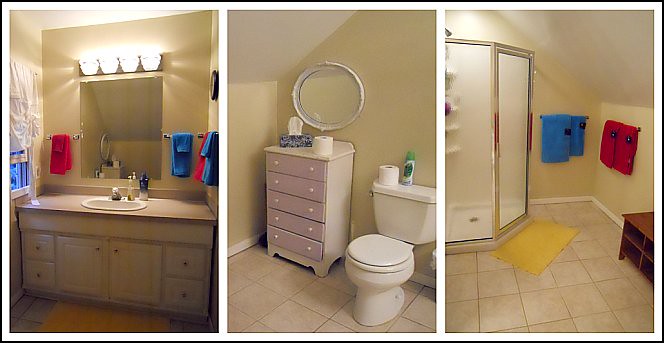 We also have a very large walk-in storage closet upstairs so they are storing some seasonal clothing and luggage in there.

We were thankfully “warned” that their person hygiene routines would be quite a bit different than ours so I provided each girl with an array of toiletries and explained what each one was for. We also suggested that they each take a shower every day or every other day, and said they had to brush their teeth before school and before bed.

They are both very neat and tidy so we’ve had no problem with messy rooms, messy bathroom, etc. They make their beds every day, hang up their wet towels, put their dishes in the sink, and keep their clothes folded or hung up!

Dave and I typed out a week-day and weekend schedule for the girls so they would know “what to expect” — and then we went over it with them on Saturday evening.

We discussed everything from what time they would leave for school and what they should wear to what time we will eat dinner and when they should go to bed. We also explained how the weekends would be much different than the week days {they go to school 6-7 days a week in their home countries} and said they were more than willing to have friends over or go to friend’s homes.

We made it VERY clear that they could come to use with any concerns they had or if they needed anything.

Over all, things are going extremely well and Dave and I are SO thankful! School starts tomorrow and I’m sure that will bring a whole new set of challenges, but at least we have one week under out belts!

Ok, so all you parent’s of teenagers — what are your best parenting tips?