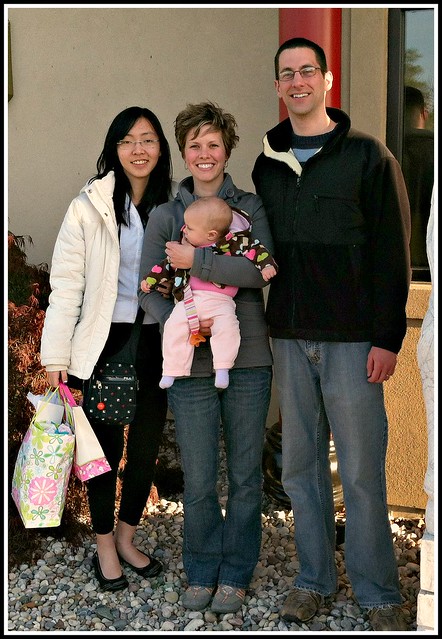 It’s officially been two full months since our international students moved back home to their countries… well, actually, one of our students was “removed” from our house in February due to a HUGE attitude problem — the other student moved out in June.

I guess we’ve just been so busy with weddings and remodeling this summer, that I never posted anything about our hosting experience.

I’ll start by saying that although it was definitely quite an experience {and somewhat stressful at times} I’m glad we did it. Dave and I had talked about hosting students for several years already, and I’m glad we finally had the opportunity.

However, I’ll also say that we probably won’t be doing it again any time soon!

Things were great in the beginning…

The first few weeks actually went much better than we thought they would. Both girls seemed to get along, both girls were doing well in school, adjusting to American life, eating American food, and were quickly learning the “routine” of our daily life.

Of course there were small issues because of language and cultural barriers, but Dave and I were both pleasantly surprised at how well things seemed to be going, and we were all really excited for the year ahead.

After only a few weeks, we started to have issues with our Korean student. Nothing huge, just simple “rules” we asked her to abide by, and she seemed to purposely do the exact opposite.

At first, we gently reminded her. When that didn’t work, we sat down with her to see if maybe she didn’t understand. After we realized that she definitely DID understand us and was just being stubborn, we emailed her parents back home and contacted the agency who set up the international program.

Unfortunately, we got VERY little support from her parents {they basically said, “that’s how she is… deal with it”} and equally poor support from the agency {they made lots of promises to help, but never really did}.

By November, things were starting to get worse, and we finally decided to get Dave’s principal and school counselors involved {they were both attending Dave’s high school}. We were hoping to resolve some of the issues before we brought a new baby home from the hospital… but although we got tons of help from his school staff, our efforts failed again.

So not only did we have an extremely fussy and sensitive newborn who hardly ever slept (which meant Dave and I never slept)… we also had a rude and disrespectful teen who was slacking on her homework, staying up all hours of the night, disobeying even our simplest of rules, and basically causing a very stressful home environment for us and for our other international student.

We decided to “ride it out” through Christmas break, and figured we could talk with her more during that time — especially since our other student went home to Vietnam during the break.

We had a promising intervention…

After our “intervention” during Christmas break, things got better through the start of 2nd semester. Dave and I were very clear with her and said that if things didn’t change dramatically over 2nd semester, she would have to find a new home.

We were hopeful that the involvement of Dave’e principal, school counselors, and our more serious tone helped… and that she really was willing to change.

And as you can imagine, Dave and I were not extremely patient anymore. We had been living with little to no sleep for two full months, and dealing with her attitude and disrespect for almost 4 months.

And then she broke the final straw…

She stayed up super late, over-slept, skipped school, and shaved half her head all over her bedroom carpet (after we specifically told her she had to wait until we could make a hair appointment later that week).

When Dave tried talking to her and explaining why we were so upset, she looked at him and said, “This is just how I am and you need to get used to it.”

Dave walked down stairs and immediately emailed the agency saying we wanted her out of our house by the following week.

And she was gone!

She was completely out of our house by the middle of February, and the rest of the year was so much more enjoyable.

Sure, there were still some awkward and inconvenient times… but our other international student was extremely polite, respectful, pleasant, funny, talkative, and she LOVED playing with Nora. We couldn’t believe how much she actually opened up and participated in more family and school functions after all the stressfulness and negativity was removed from our home.

As I mentioned before, we are glad we did it once… but I don’t think we’ll be doing it again for a long time {especially now that we’ve started our own family}.

However, for what it’s worth, we were assured {again and again} that we had an extremely rare situation and that most of the international students are not this challenging!

Dave and I are also glad that we had two students, because things went so smoothly with our other student that it kind of “reassures” us that WE were not the issue.

We actually thought about hosting our Vietnamese student again this year, but she decided to attend a school in California because Michigan was too cold for her! 🙂

It’s hard to believe that last year at this time, we were just getting ready to welcome the girls into our home. Crazy how fast a year flies by {even a stressful year!}