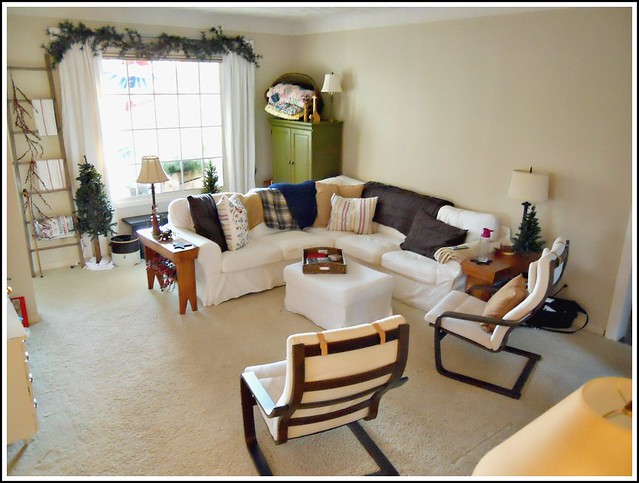 A few months ago, I showed you our new ALL white couch that we purchased on our crazy IKEA shopping trip! I’ve always wanted a white slip-covered couch so when we finished our first round of home renovations, I knew exactly what couch I wanted for our living room.

1. Get a washable slipcover.

Obviously, this isn’t always possible, but I’m a huge advocate for washable slip-covered furniture… because it’s just so easy to clean. I actually haven’t had to wash our entire slip-cover yet, but I have washed the ottoman cover and it came out bright white again.

IKEA and Pottery Barn are two stores with a large variety of slip-covered furniture — but IKEA will probably be 1/3 the price! And just an FYI, we were told that IKEA furniture was “cheap” and “poor quality” but Dave and I are both super happy with our IKEA purchases and we’ve  been told several times how comfortable our couch is.

2. Have the fabric treated with stain guard.

When we had our carpet cleaned, we also got our couch slipcover professionally treated with stain guard {which is WAY more “protective” than any stain guard you can buy from the store or do yourself}. I was honestly a bit skeptical if it would actually work, but I have to say I’m pretty impressed.

We’ve had a few small spills that never really turned into spots or stains because we were able to quickly wipe them up thanks to the stain guard.

If you have white furniture, there’s a pretty good chance that you’ll see a few spots here and there. We’ve already spilled a little pop, juice, and even pizza sauce on our couch; but since we had it protected with stain guard, we could quickly wipe most of it up before it stained. However, if there is a little of the stain left behind, I’ve just used carpet or fabric cleaner to get it out.

4. Use a lint roller regularly.

This might sound crazy, but I use a lint roller on our couch every couple of weeks — which removes all the blanket fuzzies, hair, clothes lint, etc. and helps it instantly look more white!

Dave and I tend to sit in the same spots on our couch, so those cushions get more wear and tear. To compensate for this, I shift all the seat and back cushions to the left every couple of weeks {usually when I use the lint roller}.

As you may have guessed, we definitely do NOT have a formal house and our living room is used all the time. So, even though I fully expect to buy another $99 white slipcover at some point, I am really happy with how clean it still looks after several months of use.

Do you have any tips for keeping your furniture clean?