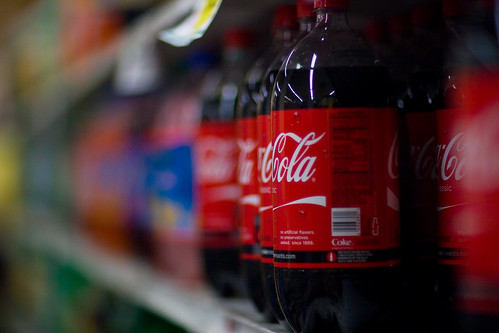 Yes, I know that soda (or pop as we call it here in Michigan) is definitely not a health food… and Dave and I honestly don’t drink a lot of it.

However, this time of year, 2 lt. bottles go on sale for as low as $0.79 and I often have $0.75 off coupons… which means I can get multiple 2 lt. bottles for ALMOST free. And with all the BBQ’s, family gatherings, and cookouts we have over the summer months, it’s nice to have a variety of pop available.

But… the one thing I absolutely hate about opening a 2 lt. bottle of pop is when I’m left with multiple half-empty bottles that we either need to drink ASAP or throw out.

Yes, I hate wasting food even when it’s junk food I got for free 🙂

So, a couple weeks ago, I posted a question on my Facebook page asking if anyone knew of creative ways to use up  “flat” pop. To my surprise,  there was a huge response.

Since we had several half-empty bottles at the time I posted that question, I immediately tried several of them to see if they worked. And since you all are so smart… they did!

Here are a few of my favorite uses for flat pop:

Pour the leftover (clear/citrus) soda into ice cube trays to use in punch, lemonade, or the next time you drink pop. This way, your beverages won’t get watered down.

Add a little citrus soda with the water in your cut flower arrangements to help prolong the beautiful blooms. I had never heard of this before, but it did work. But after I thought about it, it DOES make sense because you can also add sugar to water for the same effect… and we all know how much sugar pop has in it!

Again, I’m not sure why I didn’t think of this, because I even have Jell-O recipes that call for pop instead of water! The basic idea is to simply substitute the pop for the cold water in whatever Jell-O recipe you’re making.

Instead of soaking your cut fruit in lemon juice (which is something I always seem to run out of whenever I need it), soak it in citrus pop instead. It will prevent it from turning brown — which will probably come in handy if you have to make any fruit salads this summer.

I was also told (but didn’t try it myself yet) that you can pour pop over apples and sprinkle them with cinnamon to make really delicious baked apples. YUM!

This was a new one for me… but I’m happy to report that it DOES work! You can replace the eggs, oil, and water called for in a boxed cake mix with 12 oz. of pop. Bake as directed and it should taste delicious!

And if you want to bake a cake from scratch, here are 27 recipes that include “carbonated beverage” as one of the ingredients.

I’ve already shared my recipe for Beer Bread — which is crazy simple! You just need to add a 12 oz. of ANY carbonated beverage to self-rising flour and a little sugar.

I love roasting meat — either in the oven or in my slow cooker, and I’ve used pop as an alternative to water many times to keep the meat juicy and tender. I like using Dr. Pepper, Coke, and Cherry Coke the best and I’ve had excellent results with ham, pork, meatballs, and chicken.

Jamie left a link for 13 recipes to use up extra soda. Many of them look like great meat recipes so you might want to check them out if you’re interested!

I did a little research and you can make a quick BBQ sauce by mixing 1c. Ketchup with 1c. soda pop over medium heat until it thickens. It’s probably not the best BBQ sauce you’ll ever eat, but it’s good enough if you’re in a bind and don’t feel like running out to the store.

As you can see, I will no longer be wasting any of my half-empty bottles of pop!  However, I’m sure there are many other uses for flat (or fresh) soda/pop…

Do you have any to add to my list?