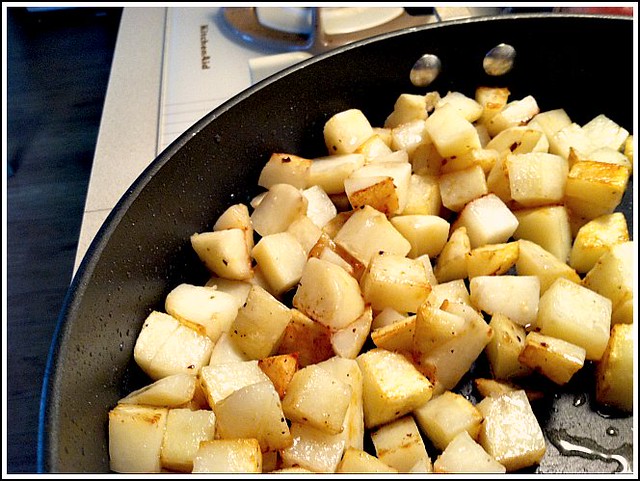 Ever since Dave and I tied the knot {almost 6 years ago} I’ve struggled with making REALLY good fried potatoes. I even resorted to using frozen potatoes in times of desperation.

Well, after almost 6 years of trial and error, I’ve finally figured out how to make really good fried potatoes.

The first thing I do is peel and wash my potatoes… and then I dry them with a clean towel until there is no water left {this is important}. Sometimes I even let them sit out on the counter for a few minutes after I dry them, just to make sure they are really, really dry.

Oh, and I should mention that I use Russet potatoes — simply because they are inexpensive and big!

I used to slice my potatoes, but the thin slices would always stick together and they took up so much space in my pan that I had to do several batches in order to make enough for one meal.

Now, instead of slicing them, I “dice” them. Well, I actually don’t dice them {that would be a little too small} — but I do chop them into small chunks, which makes them so much easier to handle and I can fit a lot more in my pan.

Nuke them in the microwave:

One of my biggest issues was that the outside of the potatoes would always get nice and crispy before the insides were soft — and by the time the insides got soft, the outsides would be on the verge of burning {hence the smoke alarm!}

So now, I toss the chopped potatoes in a bowl and microwave them for 2 or 3 minutes before frying them… that way, the potatoes are a little more tender and it doesn’t take the insides as long to soften up.

Use plenty of HOT oil:

I honestly don’t think it makes a difference what type of oil you use — I often just use plain vegetable oil or whatever other oil I have on hand. The important factor is that the oil has to be hot when you put the potatoes in the pan.

You also want to use enough oil. Fried potatoes aren’t healthy  anyway — so just add a little bit more oil.  I promise, this will help!

Fried potatoes taste delicious with just a little salt and pepper, but I often like to add a few other seasonings as well. Depending on what we’re eating, I’ll add garlic, rosemary, chives, or even paprika. I always add the seasoning after the potatoes are fully coated with oil and I don’t think I’ve had a bad combination yet — so just get adventerous!

Oh, and seriously, don’t skimp on the salt… fried potatoes need a healthy coating of salt!

Don’t stir too much:

After they are cooked through and tender, I remove the lid, turn the heat down a little bit more, and let the outsides really brown up.

After my potatoes are fully fried, I dump them onto a large platter lined with several sheets of papertowel so the excess oil can drain off.

This is not to make them healthier {they aren’t healthy… believe me!}.  It’s simply so they aren’t “slippery”. I don’t like “slippery” fried potatoes. I want my fried potatoes to be crispy, not greasy — so a quick pat with some paper towels does the trick.

I always serve my fried potatoes with a side of ketchup…. and maybe a little more salt:) 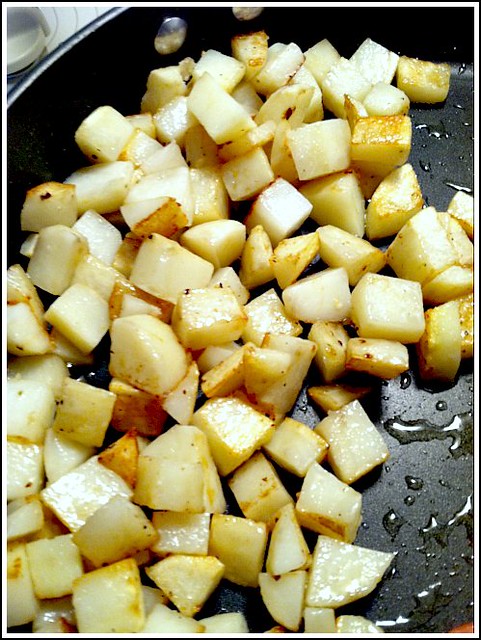 These tips have helped me significantly improve my fried-potato-making skills — a skill for which Dave is eternally grateful!

What are your tips for making really good fried potatoes?