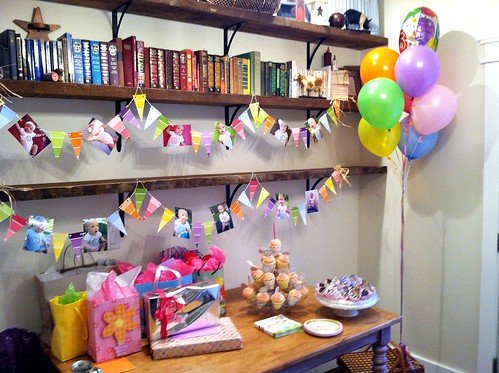 We celebrated Nora’s first birthday over Thanksgiving weekend, but since I ran my Creative & Clutter-Free Gift Ideas series last week, her party pictures and update had to wait until this week! 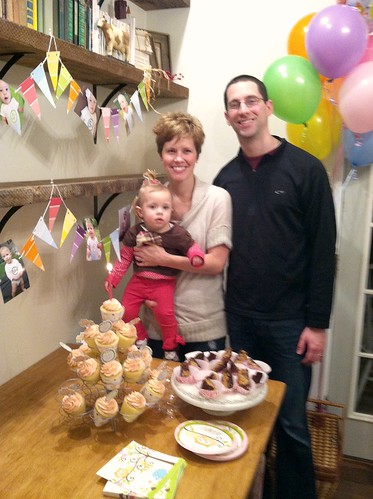 The party was a success — and while we just invited Dave and my immediate families (14 adults and 3 kids), I was still pretty impressed that I planned the whole thing — including food, decorations, and Nora’s gifts — for less than $50!

Here’s how I managed to throw her a fabulous birthday bash on a budget:

1. I used simple (and free) decorations.

While I love the look of fancy decorations — that’s just not my style. I like the idea of doing lots of decorating, but I’m too practical to spend any amount of time or money decorating for a 1 year old’s two-hour birthday party that she’ll never remember!

Instead, I used her monthly pictures along with colorful paint swatches (from a local hardware store) to create a playful bunting by the dessert and gifts table. 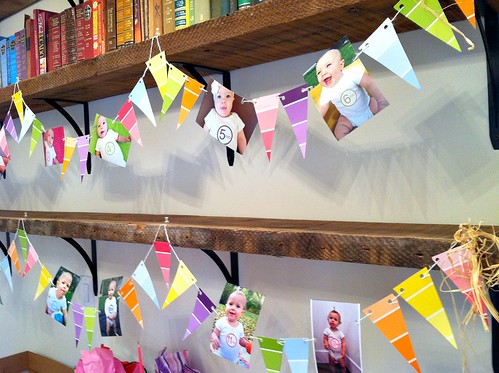 I also picked up some helium balloons at the dollar store for a little extra color. Of course, the balloons were Nora’s favorite part of the whole night! 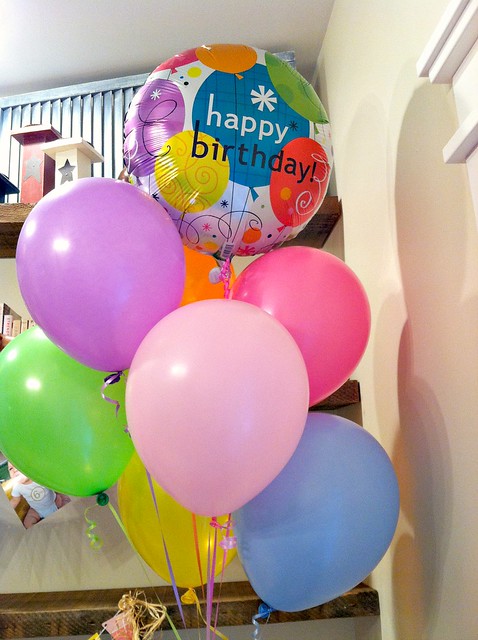 The balloons were also the first “toy” she wanted to play with the next morning! 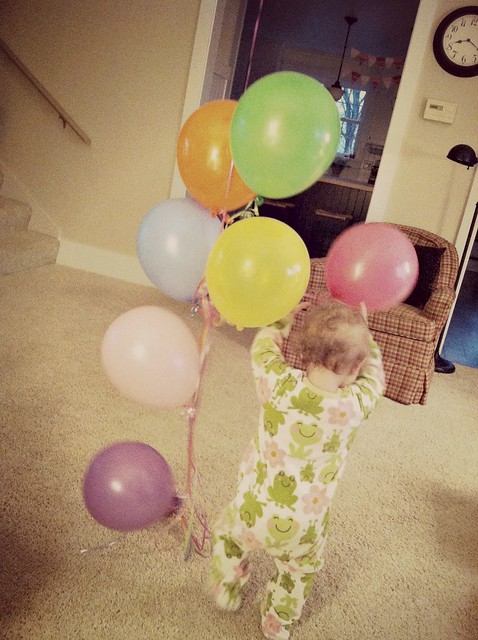 One other thing I did was to create a “memory collage board” right by the front door. 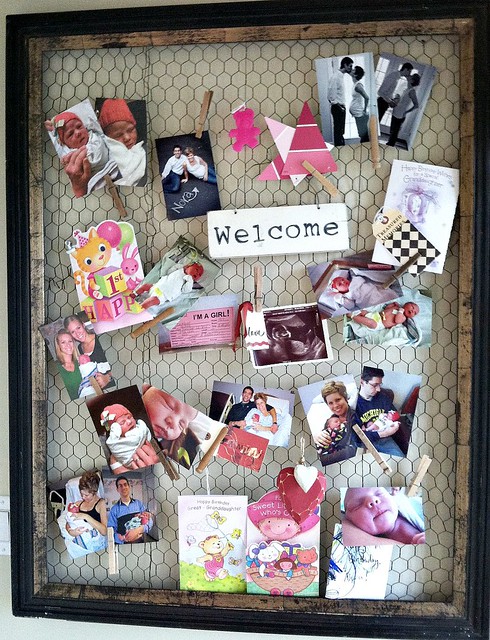 I already had this chicken wire board hung by the front door (I use it to display our Christmas cards) so I simply swapped out the Christmas cards for Nora’s birth photos and some memorabilia from last year at this time.

I hate standing in the kitchen when I have company over, so I put together a simple dinner menu that allowed me to make everything ahead of time and spend the majority of my night with Nora and our other guests…

DINNER MENU: (I forgot to take a picture, but it was set up on the island in our kitchen)

I assembled the sandwiches and cut up the veggies earlier in the day, and put the fruit salad into single-serving cups so guests could easily grab one cup and keep moving. All I had to do was put the sandwiches in the oven and set everything out on our kitchen island when it was time to eat. 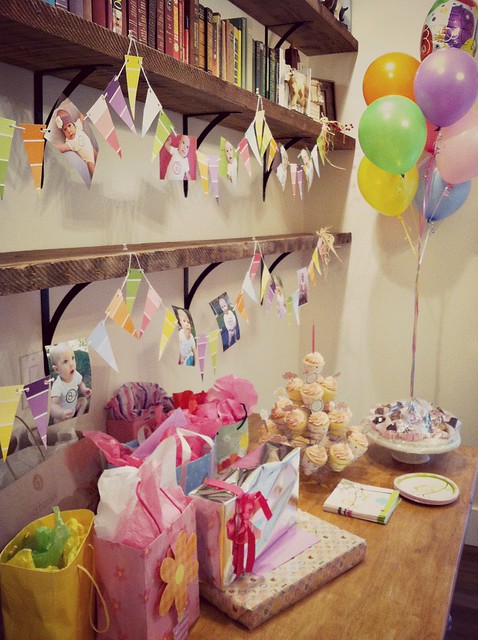 DESSERT MENU: (this was set up on a table in our office) 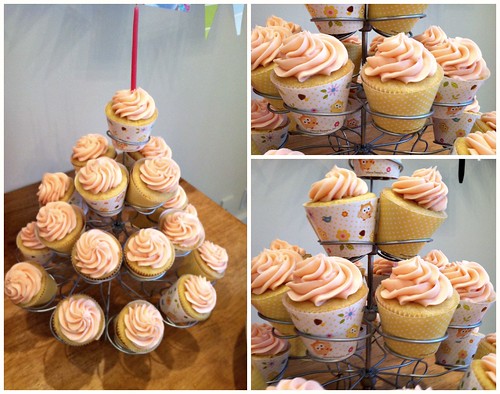 A big thanks to my lovely friend Megan (owner of Morning Glory Sweets and baker extraordinaire) who graciously donated the cupcakes for Nora’s party — helping me stay well below my $50 budget! 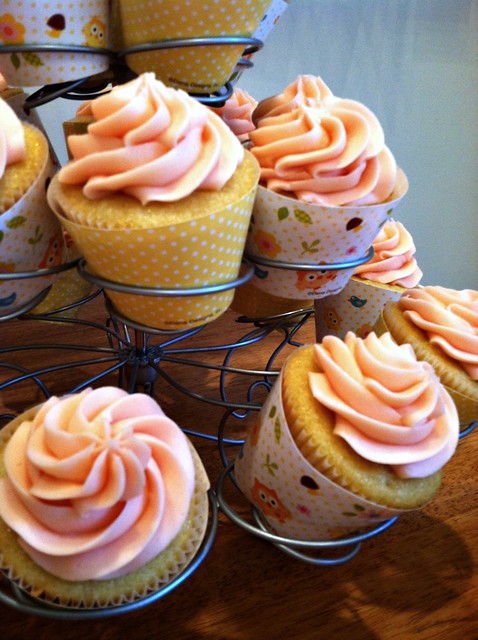 Don’t they look fabulous? Well, I can guarantee they taste even better than they look!

Megan offers a wide variety of cupcake and frosting flavors — but I asked her to make simple vanilla cupcakes with vanilla buttercream frosting (tinted pink of course!) I added the fun cupcake wrappers and picks which matched the colorful theme of the party 🙂 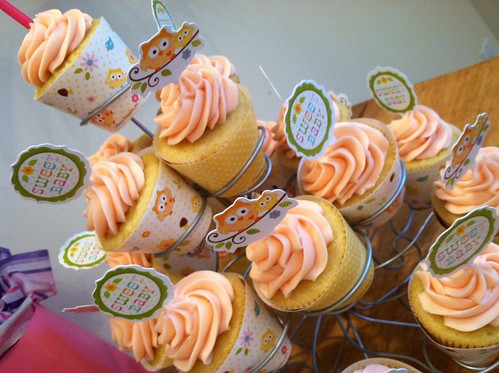 Dave and I were just a little excited to have a few cupcakes left over at the end of the night!

Nora is not going to remember this party or the gifts she received.  She certainly doesn’t need anything — however, as her parents, we can’t throw her a party without getting her at least one small gift!

Thankfully, I was able to use my Huggies rewards points to get her a fun Alligator Xylophone for free — and she absolutely LOVES it! 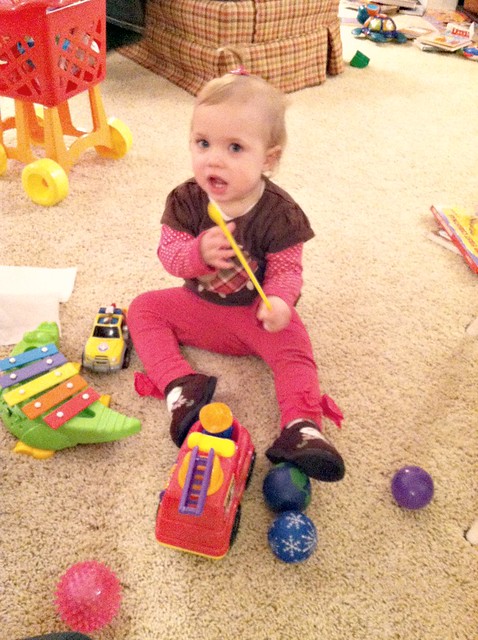 Of course, her aunts, uncles, cousins, and grandparents spoiled her with lots and lots of other fabulous gifts! 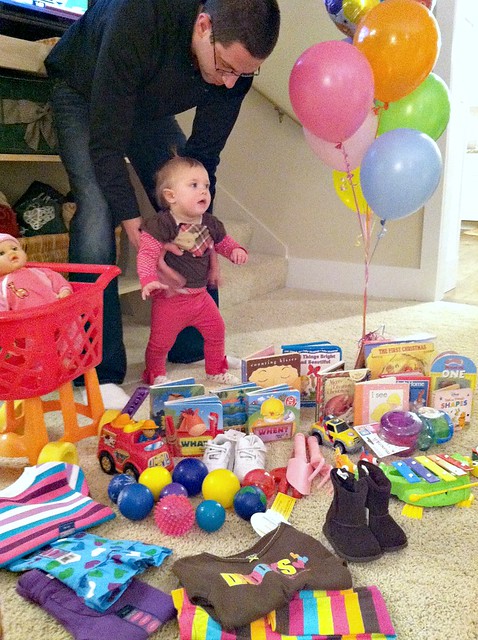 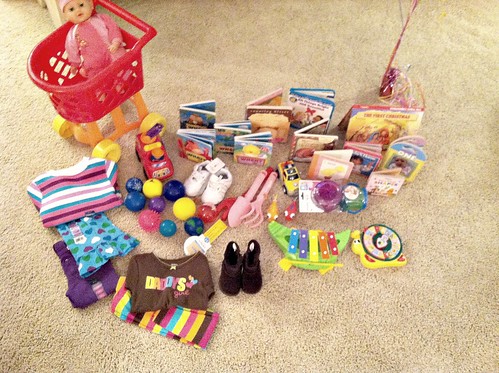 Since we just invited immediate family members, we simply called or emailed with the party details… eliminating the need for invitations. I also skipped the party favors as I often feel like they are just needless clutter.

And besides playing with Nora’s new toys, singing Happy Birthday, and blowing out her candles, there were no planned activities. I figured we would be fine chatting and playing for a few hours without any planned itinerary that might also add additional cost (and prep work). 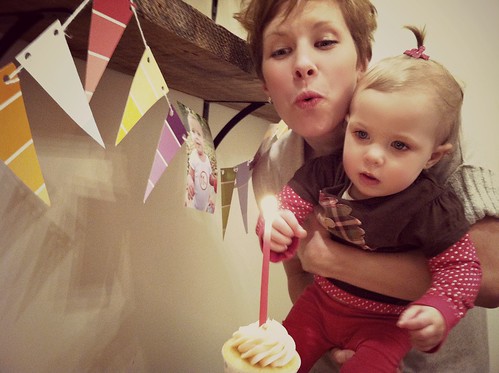 Overall, the party was a grand success… and even if Nora won’t remember it, Dave and I will!

I’m sure Nora’s party pales in comparison to many first birthday parties, but it worked for us, and I’m thrilled that we were able to pull it off on such a small budget!

DECORATIONS = $7.49 (balloons at the dollar store)

FOOD = $17.00 (I had all the food in my pantry/freezer already so I just estimated about what it would have cost me from the store)

PAPER PRODUCTS = $21 (However, I purchased them from Amazon.com using credit I received from Swagbucks — so they technically didn’t cost me anything out of pocket!)

So the only money I actually spent was the $7.49 I used to buy balloons — not bad for looking relatively cute and feeding 14 adults!

Do you have any other tips for party planning on a budget?