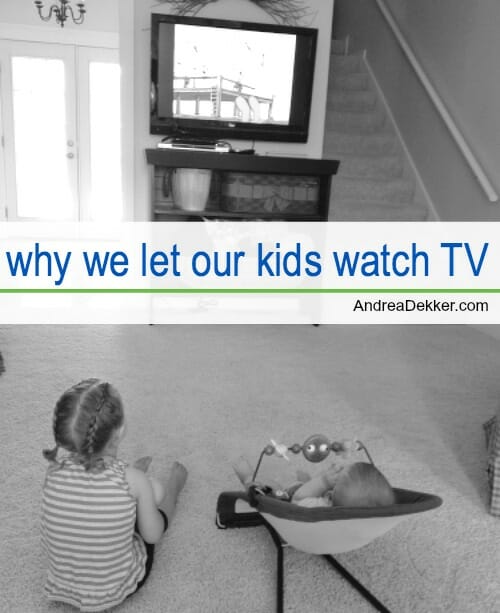 Every couple of weeks, it seems like I get another email from a blog reader asking something about kids watching TV, kids and screen time, or kids and other electronic devices. Most of the emails are asking my thoughts on the issues, if we let our kids watch TV, how much screen time we let them have, etc. etc.

While I do believe this is an important topic we should think about; I definitely would not consider myself an expert on this area of parenting (or really any area of parenting) since my kids are only 2.5 and 5 months!

I never considered doing a blog post about kids and TV or kids and screen time; but recently, I received 3 different emails from moms or grandmas who read my blog and wanted to thank me for making them feel OK about occasionally letting their children / grandchildren watch a little TV.

All 3 women alluded to the fact that they felt bad if they let their children watch any TV since most other internet sources portray TV and other “screens” to be horrible influences on children. They said that it was a relief for them to read that Dave and I DO let our kids watch TV and that we don’t feel bad about it or try to hide it.

I was honestly somewhat confused as to why it was such a big deal that I’ve shared about our kids watching TV in previous blog posts — but as I thought about it a bit more, I realized that I really haven’t seen many blog posts or internet articles about parents who let their kids watch TV. Yet, at the same time, almost every single parent I know lets their kids watch TV at some point (even the ones who say they “never” do).

Are we really too ashamed to admit we let our kids veg-out in front of the TV every once in a while?

Or maybe Dave and I are the only parents who have ever let our kids watch TV? 🙂 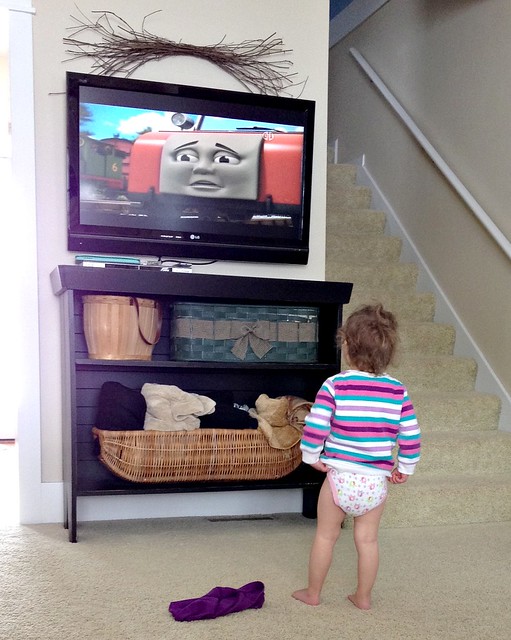 Well, in the interest of keeping things real once again — I would just like to announce, once and for all, that both our kids watch a fair amount of TV every day.

We let our kids watch TV simply because we believe in “all things in moderation” and we feel that by not making a big deal about TV or screen time when they are younger, it will simply be one of many activities they can choose to do (or not to do) as they grow older.

This might sound naive or like a cop-out excuse because we don’t want to be “mean parents”, but Dave and I have actually thought about our decision and both agree that we have no issue with select TV programs and occasional iPad usage.

Let me explain why:

Growing up, my sisters and I watched a fair amount of TV because our parents never had super strict rules about it. We knew what shows we could and couldn’t watch, and we knew we would get in trouble if we watched a show we weren’t supposed to watch. Since TV and computer time was never forbidden, we really never thought much about it being a “privilege” or a “reward” or something we wanted to do all the time. We watched TV when there was something interesting on, and we turned it off when we were finished.

However, I had a couple friends who were not allowed to watch TV — and do you know what they wanted to do EVERY time they came over to play? They wanted to watch TV. I wanted to go swimming, ride bikes, play in the woods, or make a craft; but all they could think about was watching TV because it was not allowed at their house.

I also had a girl on my floor in college that was not allowed to watch TV growing up. You would not believe how many hours and hours of TV that girl watched every day. I think my roommate and I watched TV less than 10 times the entire year, but every time we passed that girl’s room, she was parked on the couch, watching TV.

In my experience, whenever TV (or junk food, alcohol, movies, dating, etc.) is strictly prohibited, there is a much higher chance that child will rebel and crave those restricted items after they move away from Mom and Dad…

And THAT’s why we’re perfectly fine letting Nora watch a little PBS, Baby Einstein, or Netflix every now and then.

As some of you might know, Nora is EXTREMELY stubborn and strong-willed. The second we tell her she can’t do something, it’s all she can think about doing. So if we told her she couldn’t watch TV, it’s all she would think and talk about ALL. DAY. LONG.

Since she has officially stopped taking any sort of nap or rest time, she watches a few 20-minute shows each day when Simon is sleeping (usually Daniel Tiger and Curious George). This means I get a quick break to make dinner, clean up the kitchen, go to the bathroom in peace, check my emails, or do a little work. When the show is finished, Nora and I can do something fun together before Simon wakes up.

She’s happy, I’m happy, we both get a little “alone time” and then we’re ready to do something else.

Oh, and since I’m being honest, I should mention that there are days when she watches more than a few shows!

If it’s raining outside, if Simon is being fussy, if she’s overwhelmed from a busy morning out of the house, or if I just need a break and don’t feel like reading her 2 favorite Berenstain Bears books 8 times in a row, I turn on a 12-minute Daniel Tiger or Curious George episode on Netflix. 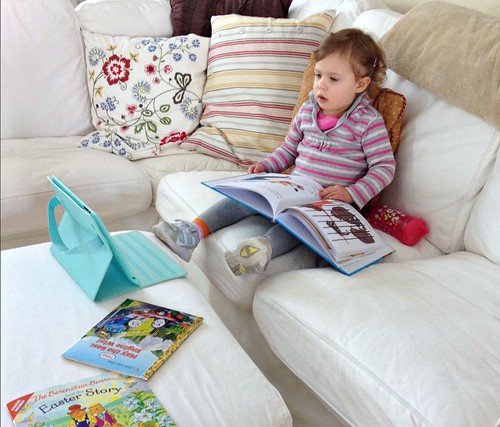 I’m home with our kids ALL day long, and we do lots of fun things. We play outside, we read books, we sing songs, we do crafts, we cook and bake, we learn numbers and letters, we play with friends and neighbors, Dave plays with them when he’s home, and their grandparents play with them regularly. They are not deprived… and there is no way a little TV could completely ruin them.

I am not writing this blog post to justify the fact that we let our children watch TV. I’m writing this post because apparently there are a lot of parents who feel bad letting their kids watch a little TV because they think everyone else is doing Pinterest crafts and educational field trips all day long.

Believe me, those parents let their kids watch some TV too! 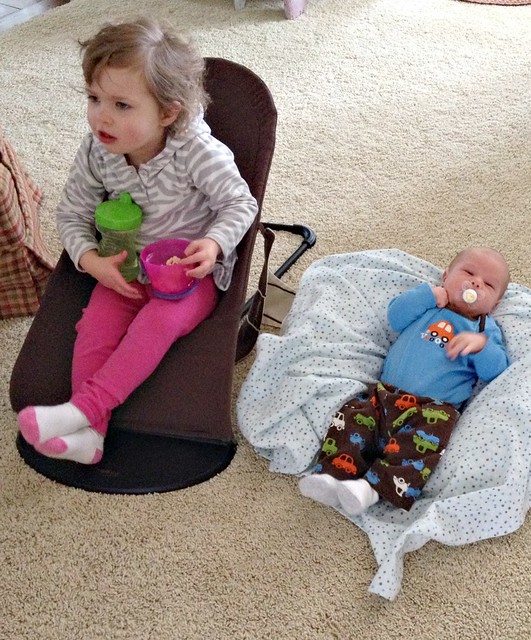 I realize that as our children get older, we will most likely need to set some rules and boundaries — like no TV, computers, or iPads in their bedrooms, restrictions on what they can and cannot watch, and no TV or fun computer activities until homework is finished. But right now, we’ll give ourselves a break and let our kids watch (and sing along) with Daniel Tiger — yes, it’s really cute!

If you are struggling with the issue of screen time for your younger children, I don’t want to sway you one way or the other. However I will share how I often make parenting decisions — especially when I’m struggling with what choice to make.

I always try to stop and think about how serious the issue is in the broader scheme of life.

When I put the issue at hand into perspective a bit more, I can see that for me, TV is not a big deal. It’s not worth arguing over. It’s not worth tears or tantrums. We can watch a little TV and then go do something else. In fact, Nora is to the point where she turns the TV off after the show is finished because she is ready to move onto the next thing. 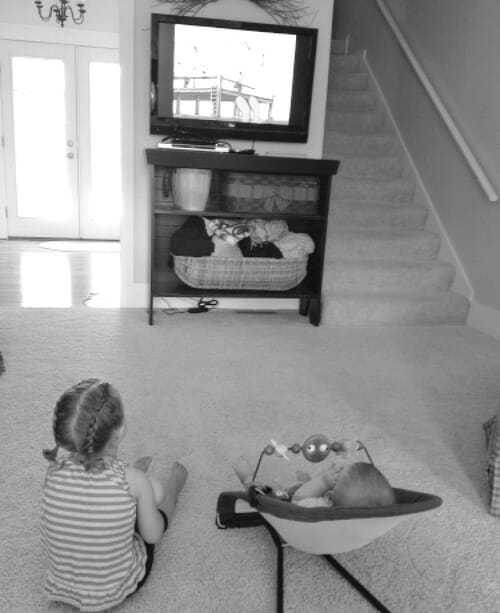 TV is not a “prize”, it’s not a “reward”, and it’s not something she craves or desires. It’s just a way to relax for a bit in between playing outside and coloring.

And THAT’S why we let our kids watch TV.

I’d love to know your thoughts on kids and screen time (especially if you have older kids).