Every single day for the past 3 years, I’ve been growing AT LEAST one other human being from my own body.

That’s right friends… I’ve either been pregnant, nursing, or both for approximately 1,104 days straight.

And while I realize that is quite miraculous (it really is if you stop and think about it) I can guarantee that my pre-baby self would have laughed hysterically if you said, “you’ll nurse your first child for TWENTY-ONE months.”

But that’s what I did.

I nursed Nora for 21 months out of sheer necessity for her survival.

Although we introduced a pacifier within hours of her birth, tried bottles of pumped breast milk starting her first week of life, tried a variety of formulas after 2-3 weeks, and even tried baby cereal at 4 months; she made it VERY clear that she would starve before accepting any of those “imitation products”.

The whole feeding process has been a VERY long journey for Nora and for me — and one I promised I would talk more about back in this post. So since I’ve gotten mass amount of emails asking for more information about our “feeding journey”, I figure I better squeeze in this post before Baby #2 arrives and I need to start all over again! 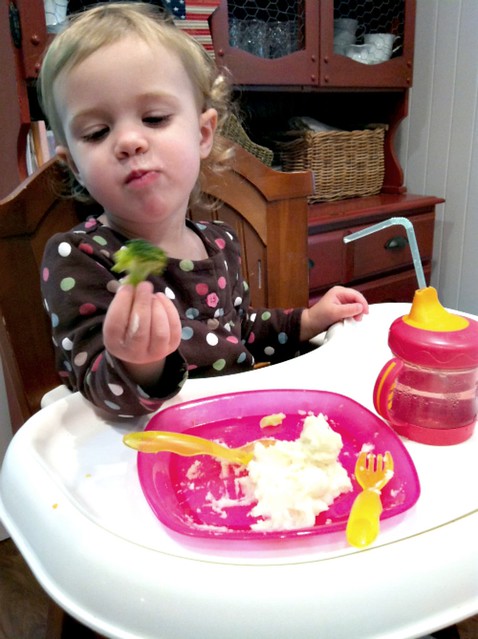 The Very Beginning: My Pre-Baby Expectations.

Between my friends and my relatives, pretty much all the young moms I knew were breast-feeding — so that’s what I was planning to do too. I knew the facts, I knew that nursing was fabulous for both baby and mom, I knew it would help me lose my baby weight, and I knew it was cheaper than formula.

I also knew that there was NO WAY I was going to let myself be consumed with breast-feeding. If it worked and was relatively easy, I would do it. If not, I had absolutely no issue switching to formula.

While I admire women who “stick it out” and basically live to breast-feed their children, that was not me at all and there was no part of me that was going to let anyone make me feel less of a women if I couldn’t (or just didn’t want to) nurse my baby.

So while I was totally fine with a little pain and discomfort, I was not willing to spend weeks and months of my life stressing over breast-feeding when there were plenty of other options available.

Dave and I decided early on that we would just see how it went, and that ultimately, I would make the decision to breast-feed or not (little did we know, Nora would actually make that decision for us!) 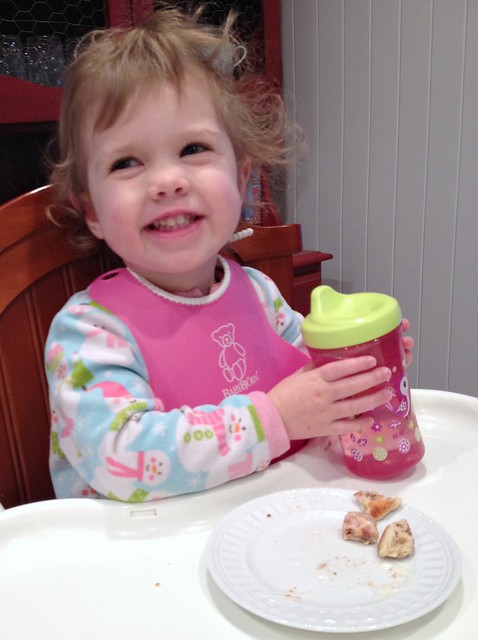 The First Few Days: Nora Nursed Like a Champ!

Within about 20-30 minutes after Nora was born, she was nursing like a champ. The doctors and nurses said I was “a natural” — which obviously felt good since I knew I had no idea what I was doing.

Nora and I never had any issues with nursing, it was never painful, I never had any complications, and it was WAY WAY easier than I ever thought it would be (I’m not trying to brag because I know this is a very sensitive issue — I’m just telling my story). Keep reading and you might not be so envious 🙂

As I mentioned above, we tried a couple different pacifiers and bottles right away — since I didn’t want her to be totally dependent on me, and since we obviously weren’t having any issues with breast-feeding. However, much to my dismay, she rejected everything we tried.

I told myself it wasn’t the end of the world and I could handle nursing exclusively for 4-6 months — after all, she was super efficient and could suck down a FULL feeding in 7-9 minute flat!

I figured that by 4-6 months, she would probably be more accepting of other foods… so we could switch over to baby food and formula at that time. 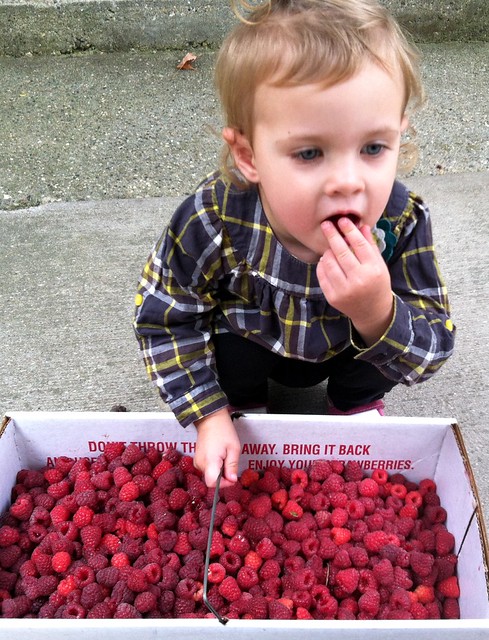 The next 9 months: Still No Luck

We regularly tried introducing different bottles and sippy cups  during the first 6 months of her life — but still no luck. We also tried rice cereal regularly starting at 4 months and various baby foods around 6-9 months, but she definitely was not happy about that.

Since she was in the 98th percentile and growing like crazy, the doctors weren’t concerned with her non-eating — and all our family and friends assured me that some kids just took longer to start eating.

I wasn’t overly concerned, but I was getting weary of nursing so often (she still ate about every 2 hours around the clock) and I had extreme anxiety worrying about what we would do if something happened to me and I couldn’t feed Nora anymore.

By her 9-month check-up, the doctor was starting to get just a little concerned that she wasn’t eating ANYTHING at all — but assured me that Nora was super healthy and that she couldn’t see anything wrong with her throat, mouth, etc.

So I kept nursing — figuring it’s totally normal to nurse for a full year. 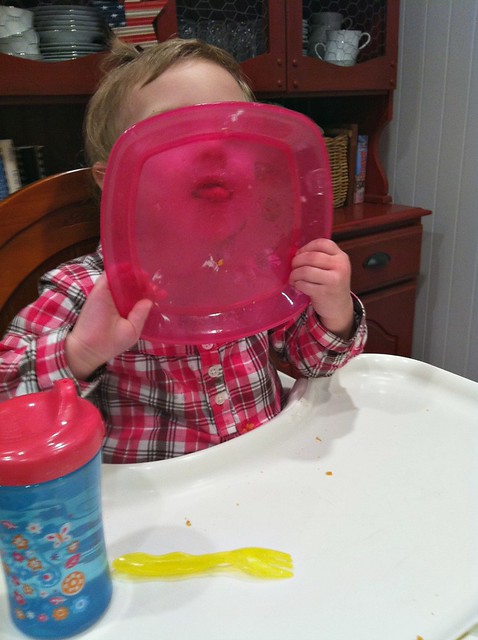 By Nora’s first birthday, I was starting to get really frustrated with her refusal to eat any food. The ONLY foods she would even try to eat were tiny amounts of yogurt and a few Rice Krispy puffs (which she usually gagged on).

We had spent hours and hours and hours over the past several months trying to get her to eat anything, but still no progress. I was SO tired of nursing all day and night and literally couldn’t go anywhere for more than a couple hours otherwise Nora would scream non-stop until I came back to feed her.

It was to the point where I was regularly making excuses as to why I couldn’t participate in certain business and personal opportunities because the excuses were easier than trying to explain that I still had to nurse my 17-month old child every 2 hours!

When Nora was 16-17 months old, we went through a series of tests and therapy sessions with a local very well-renown organization. We confirmed that there was nothing wrong with her throat, her tongue, her mouth, or anything else that would physically prevent her from being able to eat normally.

It was a relief that nothing was seriously wrong — but at the same time, it was super frustrating because we were right back at square one with nowhere to turn. The therapy that everyone told us would FOR SURE WORK didn’t work… and the only progress we had made was that Nora would now eat mashed potatoes and macaroni. 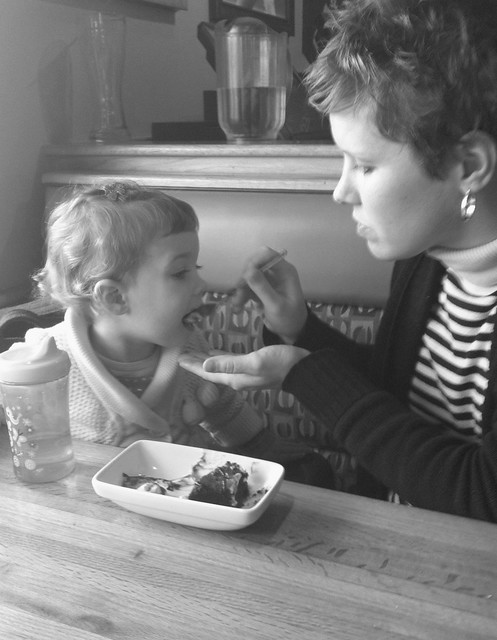 At 18 months, I found a new therapy program (almost by accident) that was extremely close to our home and MUCH less expensive than the previous therapy program. I was hesitantly optimistic, but figured I didn’t have much of a choice, so we signed up and headed to our first therapy session (here’s the link to their website).

It was 100% different than anything we had tried with Nora, and I felt really good leaving that first day. We immediately started a “brushing” regimen with a special skin brush and listening to special music on headphones. 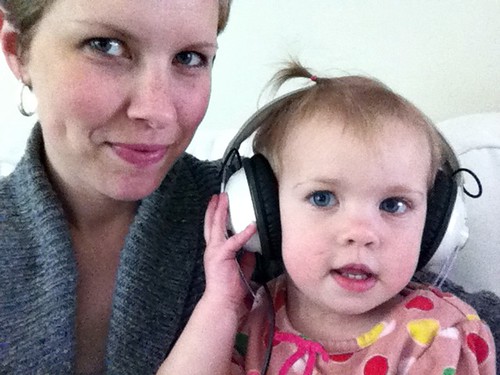 We noticed a difference right away — and over the next 2-3 months, Nora became MUCH more willing to eat basic foods like cheese, bananas, pasta, fish crackers, etc.

Also, for the FIRST TIME EVER, we found a sippy cup she would actually drink from (yes, she refused all bottles and sippy cups for a full 17 months!)

By 21 months, I was only nursing her once or twice a day and I literally felt like I had my life back.

Of course, when she was 20 months old, I realized I was pregnant again — and although that news was exciting, I couldn’t help but feel slightly depressed knowing that I was starting all over again. 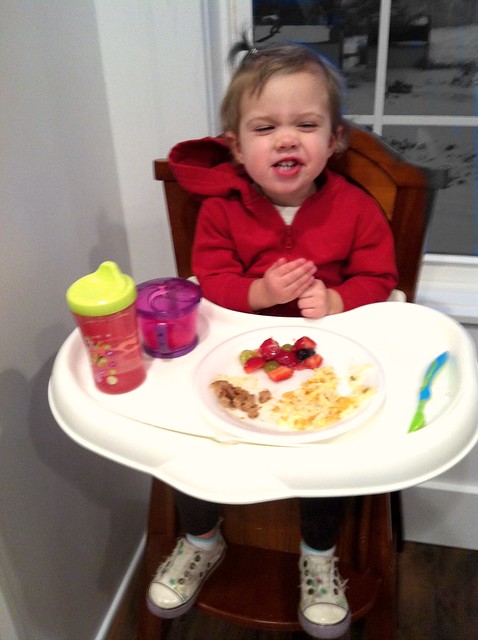 Although the variety of foods she ate wasn’t fabulous, she was still growing well, and more importantly, she wasn’t growing from ME!

We aren’t going to therapy anymore, but we continue to see HUGE HUGE progress in Nora’s eating. She’s trying new foods all the time, eating more and more with every meal, and finally willing to feed herself (it was crazy how long she refused to feed herself and only wanted us to spoon-feed her!)

If you didn’t know Nora’s food journey, you most likely wouldn’t think anything was wrong with her eating habits — she even eats lots of veggies! 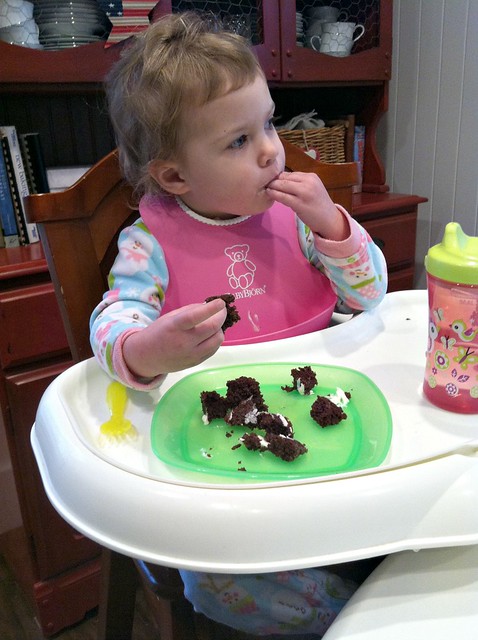 Obviously, we aren’t totally “out of the woods” and there are still many things we need to work on — like the fact that she still will not drink anything but water — but I’m thrilled to finally be at a point where I can share this update with you.

As I mentioned above, it was a REALLY long process and so much more difficult when we were “in the thick of it” and not knowing exactly if or when we’d see any progress.

In general, I don’t think it would be awful to nurse for 18-20 months IF my child was also eating normal infant and toddler foods along with breast milk to form a more balanced diet. In our situation, Nora was 100% dependent on me which made my life a lot more difficult, and was probably part of her extreme separation anxiety (which, by the way, is also getting better!) 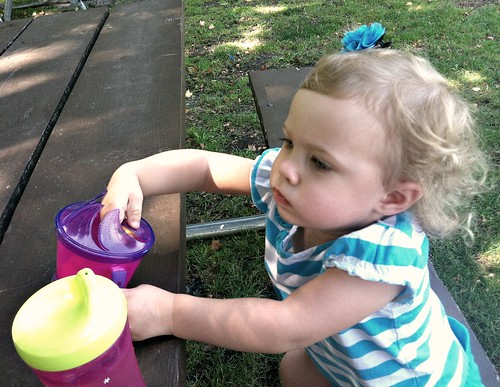 My “plan” for feeding baby #2 is to start out nursing, but to introduce bottles of breast milk and possibly some formula very early on — just because I don’t think I can handle being so tied down for so long again. I’m also planning to be more aggressive with trying different bottles until we find one he likes (if that’s what it takes).

Since I’m the type of person who just can’t nurse in public, being stuck at home all day every day for 21 months was even more than my home-body self could take after a while, and I really don’t want to do that again 🙂

I realize that how we feed our children is a very personal choice that can also be somewhat controversial — so please know that my goal in writing this post is not to say “you should do it my way”. It’s more to celebrate that Nora is finally eating — especially since so many of you have inquired about her progress.

Thanks so much for following along on our journey and offering your help and support along the way. I’ve gleaned many words of wisdom and tips from your emails and comments — some of which have aided in Nora’s eating success!