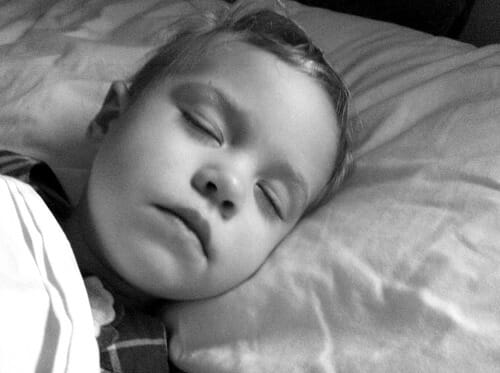 Over the last few months, I’ve gotten many emails asking for more information about Nora’s sleep… or lack of sleep (you can read a little of the background here). Often the emails are from overly-tired parents with children who are also not sleeping through the night… they’re simply looking for ANY sort of advice as to what they might try to get their kiddos to sleep.

I TOTALLY get it!

Sleep deprivation is used as a torture technique for a reason — and when you’re sleep deprived, everything (and I mean EVERYTHING) is more stressful, more work, more tiring, and less fun. Believe me, I’m speaking from LOTS of experience.

The “good news” is, you and I are not the only tired people on the planet (and if we really stop to think about it, there are much worse things than a child who doesn’t sleep).

The bad news is, it still totally sucks — and nothing anyone says or does will make us feel any less tired.

I’ll let you know right now that we still haven’t found anything that has magically worked — but I do think the information below could still offer some help and encouragement to anyone who also has a poor sleeper.

NOTE: If you’re looking for more tips on dealing with exhaustion (no matter what the reason), here’s a good post for you. 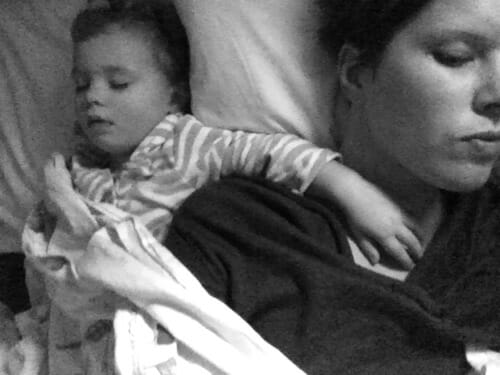 How is therapy going?

Well, the reason I haven’t given much of an update is because, sadly, there’s not much to update about. Aside from a tiny glimmer of hope when she randomly slept over 6 straight hours by herself in her own bed (totally a one-time thing) we haven’t noticed much sleeping improvement.

We’ve taken a break from therapy for now because nothing is working. I will still sing the praises of our therapist though — 6 months ago, Nora wasn’t eating solid foods, she wasn’t going to nursery at church, she couldn’t handle being around strange people or in strange places, and she basically just cried A LOT for no apparent reason.

So we’ve come a really, really long way with our therapy, and I don’t regret it for a second. I just wish we could have figured out something magical to get Nora to start sleeping more.

Have you moved her upstairs yet?

We were really hoping to have Nora sleeping through the night before we moved her to the new bedroom upstairs — but since the new bedroom is basically ready to go (minus a few finishing touches), we’re starting to think that we might just take the plunge, move her upstairs, and see how it goes. Because you all know how much I just like “winging it” and “going with the flow” 🙂

It honestly can’t be much worse than it is now — just more walking back and forth on our part. And who knows, maybe the change of scenery will make some sort of difference? We can always hope! 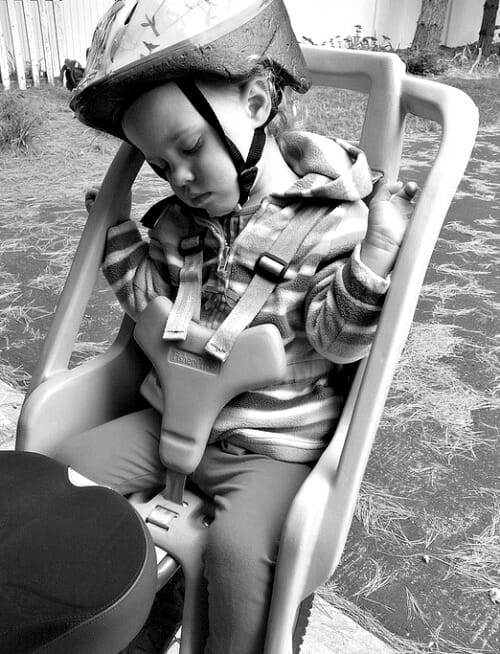 What will you do when the new baby comes?

Honestly, we’re trying not to worry too much about this yet. We still have about 12 weeks to go, and as many of you know, all kids are different and there’s no way to predict or perfectly plan how life with 2 kids is going to be.

Yes, it would be awesome if Nora was on a set schedule every day so I could attempt to work the baby’s day around her day… but that’s just not the case.

Who knows, maybe the baby will be really content and sleep really well. Or maybe not. Maybe Nora will love playing with the baby and be very entertained by him. Or maybe she’ll be super jealous and even more clingy to me.

There’s just no way of knowing how life after baby is going to be, so I’m trying (really hard) not to even think or worry about it at all. I’m certain it will be a huge adjustment at first, I’m sure there will be many nights when both Dave and I get little to no sleep, and I’m sure there will be parts of it that are way harder than we thought (and way easier than we thought).

But for the time being, I’m just trying to focus on what’s going on right now and not worry about all the “what ifs” after the new baby is here.

So is there anything that has actually worked?

There have been a few things that have helped a little bit for a couple of days (and I always get my hopes up), but after 2 or 3 days, its right back to normal again.

Nora is getting to the point where we can start to reason with her a little bit. When I go in her room in the middle of the night, I say, “you’re getting too big to sleep with mommy. Nora needs to sleep in her own bed and mommy needs to sleep in her own bed”. This doesn’t always help, but I can tell she understands what I’m trying to say and I do think it will start to work… eventually!

Honestly, the best thing we’ve done so far is simply learning how to adapt to HER.

Instead of trying (sometimes for hours) to get Nora to take a nap during the day, I just gave in and realized that on most days, she really doesn’t need a nap.

Instead of spending 30-90 minutes reading, laying in bed together, and listening to her scream and cry every afternoon because she doesn’t want to take a nap, we simply keep playing or doing whatever we’re doing without worrying about a nap.

Instead of sitting home ALL afternoon on the off chance Nora MIGHT take a nap, I’ve freed up my entire afternoon to run errands, make appointments, or do whatever else I need/want to do. If she falls asleep in the car, oh well — she must have been tired enough. But usually, she just jabbers away in the back seat, in the shopping cart, etc.

If I can tell she’s super tired and we’ll be home anyway, I might try for a nap — and often it works because she’s getting to the point where she knows she’s tired and a nap has basically become “optional” in her eyes (not a torturous every-day ordeal). However, if she doesn’t act tired, we keep playing and try to put her to bed a little earlier.

It might sound like we’re letting Nora run our lives (and to some extent that is a little true) but after 2 years of trying to mold her to OUR schedule, we realize that everyone is way, way, WAY happier if we simply try to work around Nora’s “schedule”.

Since it’s much easier for Dave and I to adapt and change our plans slightly to fit Nora’s sleeping schedule, we’ve just decided that’s what we’ll do for now.

For example, if she is super tired and ends up going to be extra early at night, Dave and I will either decide to go to bed super early ourselves OR both hunker down and get a ton of work accomplished.

If Nora takes a nap during the day, I can almost always alter my schedule to either knock out a bunch of work, make a quick meal for the freezer, finish a few household chores, make some phone calls, or lay down and rest myself — whatever I feel like I need most on that day.

How does Dave’s schedule work into the mix?

Dave just started basketball season a couple weeks ago — so that was another big adjustment to work around. From now until the end of February, Dave will be extra busy — which is kind of a bummer for my productivity, but we’re both happy that basketball season should be finished before the new baby comes!

I can’t complain too much though because my schedule is so flexible. I’m also really thankful that although Dave is often gone all day (and sometimes until well after Nora goes to bed), he’s still a very “proactive” parent and always sits down with me at the end of the day to map out a game plan for the next day.

We discuss things like when he’ll be home, who’s going to put Nora to bed (it takes a long time so we take turns!), what we’ll have for dinner, when we’ll eat, what I need to get accomplished and if there’s anything I need him to help me with.

Without this constant communication and team work, I would never ever be able to do everything I do on a daily basis. 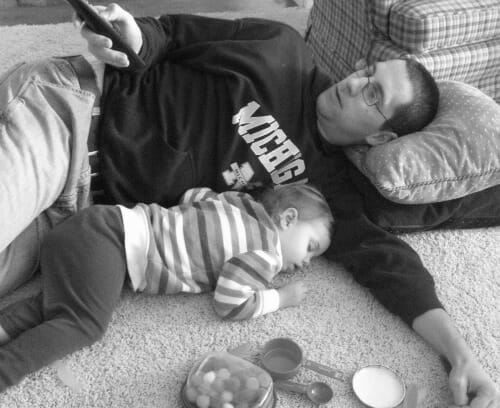 So I realize this post doesn’t have any magic answers or tons of exclamations marks after a big announcement that Nora is finally sleeping through the night… BUT, we are making it work. And honestly, it’s not nearly as bad as it was.