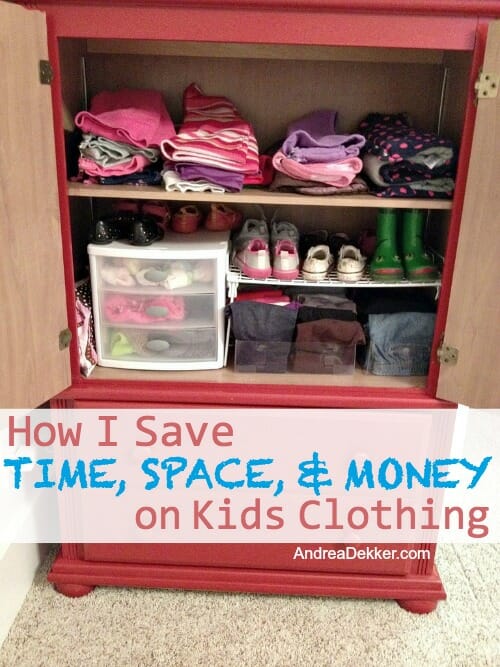 Even before we had kids, I was no stranger to the fact that kids clothing was a large source of clutter in so many homes. After all, I worked with countless moms who were struggling to manage the massive amount of tiny clothes that were currently too small, too big, the wrong gender, the wrong season, or being saved “just in case” — not to mention all the clothing that actually fit!

I explained more about my decision to purge almost all our too-small baby clothes in this post… but today, I’m sharing more about how I avoid overbuying and over-spending on kids clothing in the first place.

Oh, and I should note, some of the suggestions I share below are much more applicable to infant and toddler clothing than to older children, but I think many of them could also work for older children’s clothing as well. 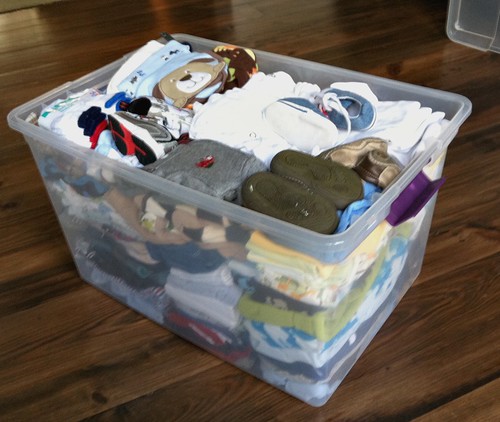 Besides a few clothing gifts we got when Nora was born, my children have worn almost no brand new, tag-attached clothing. I realize this might change a bit as they get older — but for now, we’re enjoying $0.50 garage sale clothes and lots of deals from ThredUp.com (using credit I’ve accumulated).

I have periodically looked through 75% off racks of kids clothing thinking I would certainly find a deal — but it’s still often $6-$8 for a pair of leggings or a t-shirt — no thanks! I’ll stick with used 🙂 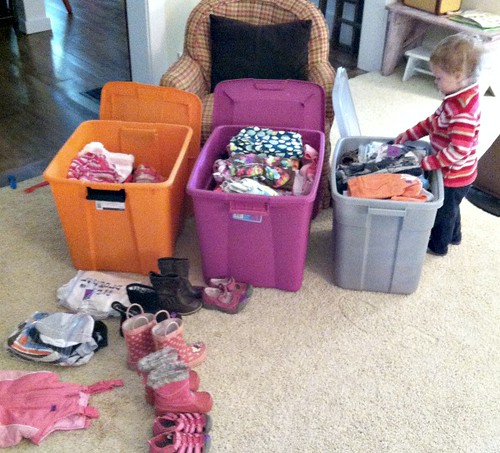 {“shopping” from my cousin’s daughter’s clothing}

Special occasion outfits like Halloween costumes, dance outfits, wedding or other formal attire, etc. are such a huge source of clothes clutter since they are usually only worn once and then stored.

These items of clothing can also be extremely expensive — so if I can’t find them used, I will most definitely try to borrow them. We’ve borrowed many costumes (including Nora’s monkey costume for her Curious George birthday party) and have saved so much space and money. 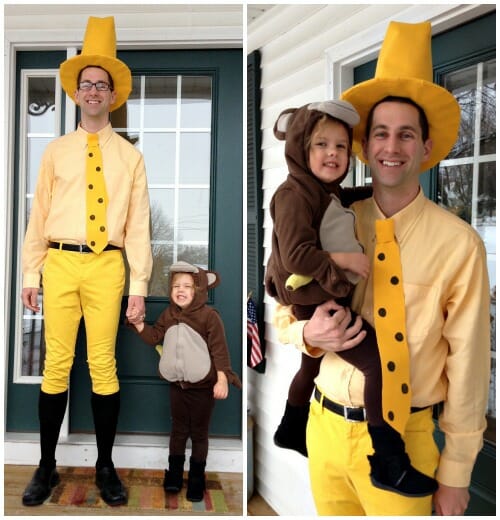 In fact, now that I think about it, I’ve been borrowing and lending clothing since way back in high school when my friend, cousins, and others would trade dresses and accessories for formal dances, prom, etc. It was such a huge cost savings for everyone and it was nice to have dresses worn more than once.

This is one of those tips that will probably only work until about size 4T — but I can’t tell you how many baby and toddler clothes I didn’t have to buy because I skipped sizes. Not to mention, the clothes I did buy were worn SO much longer than if I didn’t skip sizes. This means my baby clothes get more use and I don’t need to rotate nearly as often.

So, for example, I usually don’t have any newborn clothes because my babies are pretty big. Maybe I’ll just borrow a few onesies or sleepers for the first week or so. Then I jump right into 3 month clothes. Yes, they are big — but who cares. Babies are all curled up and squishy anyway. 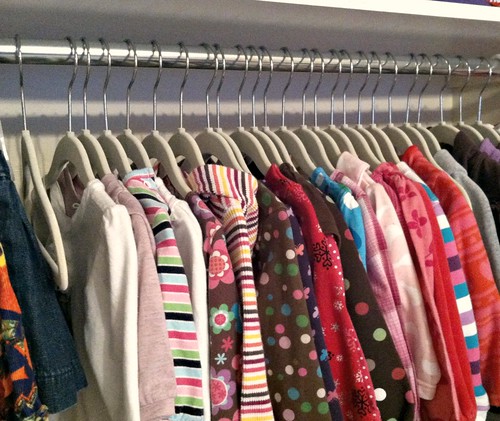 When the 3 month stuff starts getting significantly too small (like really too small), I’ll jump straight to 9 month clothing. This is usually around 4 months — so yes, the 9 month stuff is too big, but it’s actually not as bad as you might think.

It’s not that I refuse to buy any clothing for the in-between sizes, I just try to drastically limit those in-between items as I’ve found there usually isn’t a massive difference between 6mo. and 9mo. clothing.

Simon has actually been wearing 12mo. clothing since about 6 months old (I skipped over the 9 month size) and it’s all starting to get too small. I recently began rotating in the 24 month items we have… and surprisingly, most of them fit already! He won’t even miss wearing those 18 month clothes — and I certainly won’t miss buying or storing them!

4. I Get Double-Duty Out of Clothes

Often times Nora can wear her leggings for pants in the winter — and then keep wearing them as capris the next summer. Same thing with dresses — she’ll wear it as a dress one year, and then as a shirt the next year. 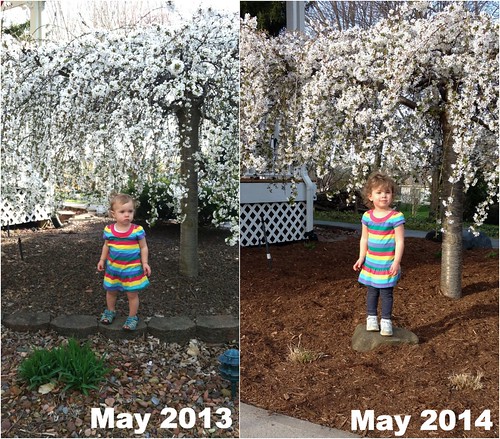 Also, since we potty trained Nora over the summer, she was able to wear the same shorts and skirts for two summers in a row (first with diapers, then with undies) so I literally didn’t need to buy any summer stuff this past year.

I think this tip is more applicable to girls than boys — but we’ve saved a TON of space and money on Nora’s clothing using this concept!

Even though I almost never buy new clothing, there are still plenty of cute matching outfits for sale at garage sales, second hand sales, and ThredUp.com. However, I rarely buy anything as a matching set as I feel it often limits my options.

Instead, I stick to solid color pants whenever possible — and then mix and match shirts as I find good deals. I get so much more wear out of my kids clothing this way and can get by with just a couple pairs of pants for the appropriate size/season. 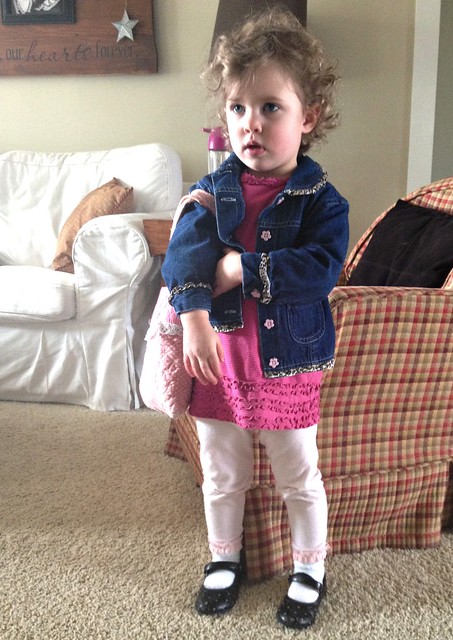 I know this might seem like the opposite of what I should be doing — but in my experience shopping for 2 different kids, 2 different genders, born in 2 different seasons, I’ve been burned many more times than I’ve been successful. It seems I can never accurately predict how big/small my kids will be a year from now, and everything I buy ahead seems to be too big or too small when the appropriate season rolls around.

So I’ve stopped buying ahead. Period. And I’ve honestly saved a bunch of time, money, and storage space as a result.

Since my kids wear each size of clothing longer (see #3 above), I have plenty of time to note when their clothing is starting to get snug… and then start looking for a few good deals on the next size I plan to buy.

The picture below is honestly EVERYTHING Simon owns right now (plus a handful of pants in one of the dresser drawers). I just purchased a couple items for spring/summer (we’re going to Florida over Spring Break so I’m trying to plan ahead a little bit) but that’s it. 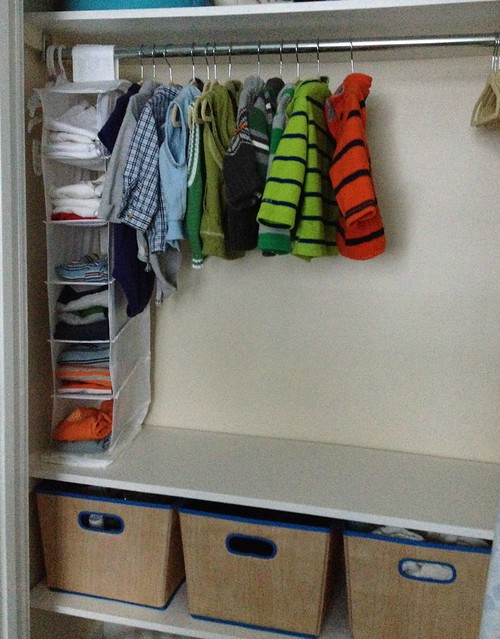 7. They Wear The Same Clothes… A LOT!

I personally don’t have a magic number of clothing items you should have for each size or season — but I will say that in my own experience, you almost always need significantly less clothing than you think. Seriously, it’s amazing how few items you can rotate in and out for months at a time (especially when they are tiny and don’t wear anything out).

After the first few months of Nora’s life (when she finally outgrew the bazillion clothes gifts she amassed) I have continued to buy less and less items per size. A couple pairs of solid colored pants, a handful of coordinating tops, a couple sweatshirts or sweaters, socks, onesies, PJ’s… and we’re good to go.

I often smile when I’m writing blog posts and see Nora and Simon are wearing the same things in 2 or 3 of the photos — even though they were taken on different days. I’m guessing readers don’t even notice (or care!) 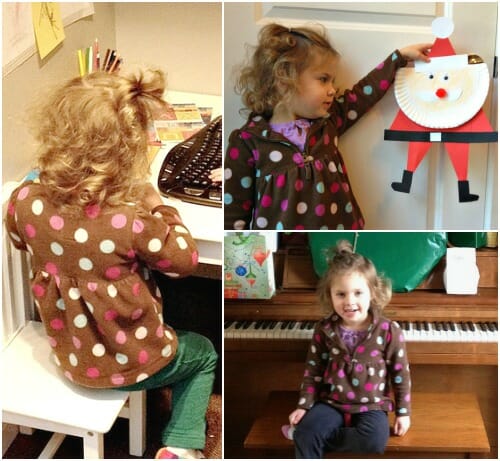 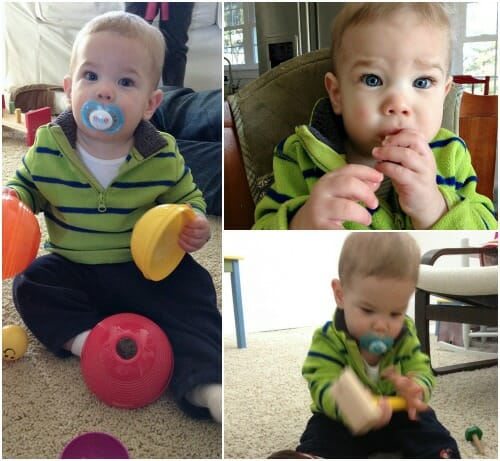 Yes, we do have a couple outfits that are just for church or nicer occasions, but other than that, I could honestly care less what clothes Nora chooses to wear outside to play. If something gets dirty, I wash it. If it gets stained, she keeps wearing it until it’s too small and then I toss it. I figure the items were so frugal and she wears them for so long, that it really doesn’t matter to me.

I realize I may change my stance on this once she starts school — but for now,  not having specific play clothes greatly reduces the number of clothes my kids need — and eliminates MANY arguments with my opinionated fashionista who insists on wearing skirts outside ALL the time! 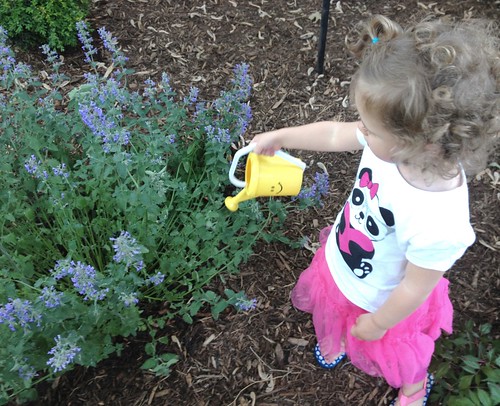 I know these tips might not work for everyone, but they have significantly reduced the amount of time and money I’ve spent shopping for, washing, and storing kids clothing the past 3+ years… and I have a feeling these tips will continue to work for several years to come.

And yes, I’d LOVE to hear any other tips you have… or any cool clothes-clutter strategies that have worked for you.

How do you control your kids clothes clutter?