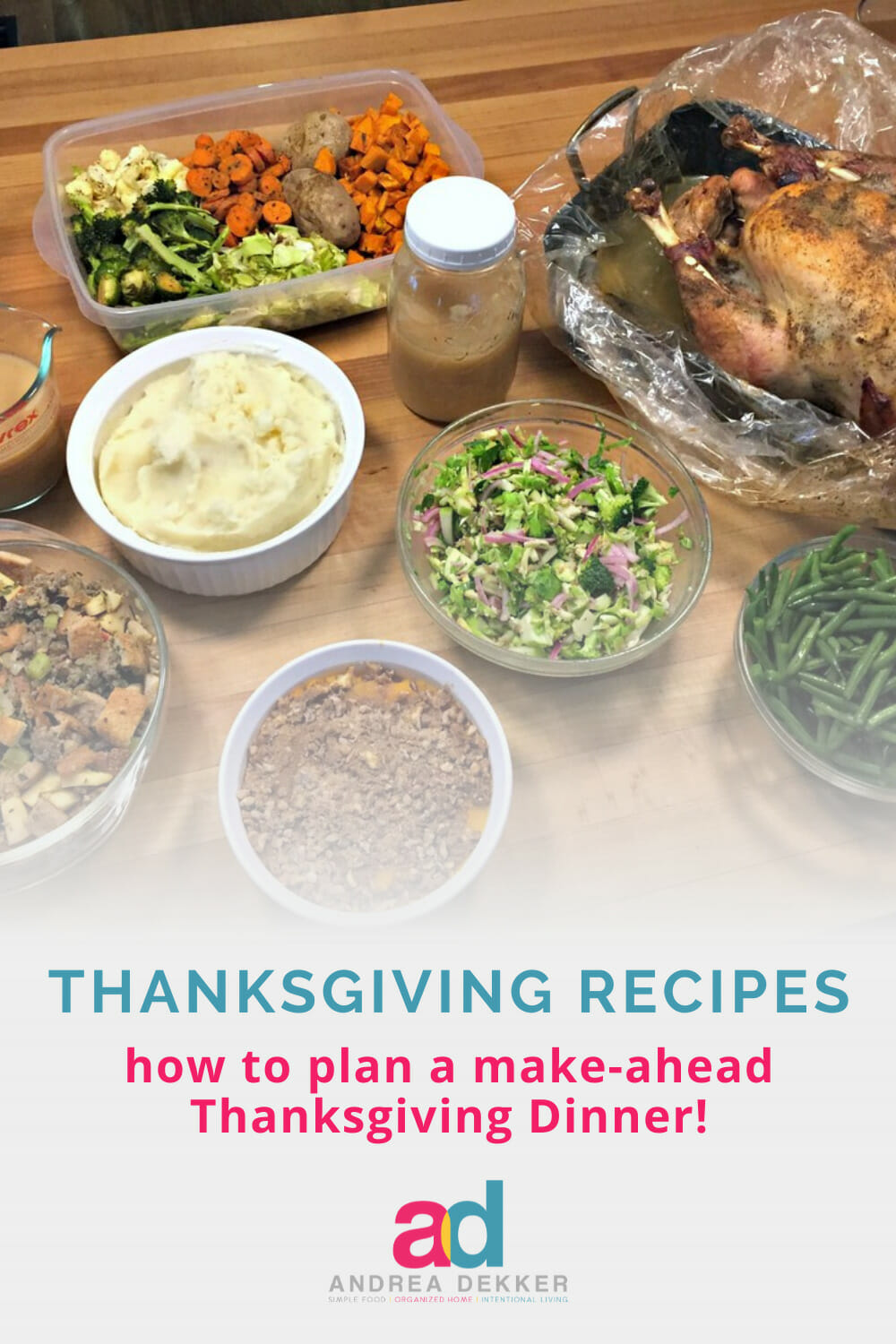 Thanksgiving has always been my favorite holiday — mainly because there are no gifts involved! It’s also not nearly as consumer-driving as Halloween, Easter, Valentine’s Day, and Christmas.

Plus, I LOVE making all sorts of delicious fall foods, desserts, and other Thanksgiving favorites this time of year.

The only thing I don’t love about our large holiday gathering is the last-minute rush to prepare the food at the exact right time while everyone is waiting and watching!

As a result, I’ve nearly perfected the art of making ALL my favorite Thanksgiving recipes in advance!

Yup, you read that right!

I’m to the point where I almost don’t do any cooking on the actual holiday — just re-warming the food.

And I promise, it still tastes amazing!

A Few Benefits of Make-Ahead Recipes:

The only downside (from my perspective) is that you won’t get that nice Norman Rockwell moment with your family eagerly waiting while you place the giant turkey on your table.

Just buy the puzzle to do after your meal, and call it good! 😂

Have I convinced you yet?

Ok then, let’s dive into some of my favorite make-ahead Thanksgiving recipes, and how you can easily make them ALL ahead of time!

How to Make Your Turkey Ahead

I’ve been doing it this way for YEARS and no one has complained yet!

I’ve also heard from hundreds of you over the years — that you now also make your turkeys in advance. So this method works for more than just me. 🥰

Simply follow the step-by-step instructions below to make your turkey anywhere from 1 to 7 days before your meal. I also wrote an entire post about this method a few years ago.

STEP 1 = Season your turkey as desired (I use garlic, salt, pepper, onion, thyme) and place BREAST DOWN in an oven-safe “turkey bag”.

STEP 2 = Roast turkey according to directions on oven bags (based on the weight of the turkey). Allow turkey to rest in the juices until it’s cool enought to handle.

STEP 3 = Remove meat from the bones and refrigerate in a large food storage container.

I usually try to cut large chunks of meat, and I keep the bones in the legs so someone can eat those! I also separate white and dark meat so people can choose their preference.

STEP 4 = Make bone broth with remaining bones. You can then use this broth for gravy, stuffing, and when you reheat the turkey on Thanksgiving Day.

Just put the bones in your largest slow cooker, fill it with water, and cook on low for 24 hours.

I use 2 slow cookers — one for dark meat, one for white meat. I cover the meat with bone broth and turn the slow cooker on low, starting about 4 hours before we’re going to eat.

If you want to do it in the oven, you’ll probably only need 1 hour at 250ºF — but make sure you pour broth in the pan and cover with a lid or tinfoil so the broth doesn’t evaporate.

It won’t look as pretty as a nicely dressed bird, but it will taste amazing and you’ll save yourself so much stress and mess!

Every recipe below can be made 1-4 days in advance, covered, and refrigerated until your Thanksgiving Meal.

Simply preheat your oven to 350ºF and throw everything into the oven at the same time (about 45 -60 minutes). Or cook in a slow cooker on low for 4 hours.

Make sure your food is covered if you’re reheating it in the oven.

I’ve had good luck warming up homamde bread and rolls that I make the night before.

However, if you’re using pre-packaged refigerated dough (like for the pull-apart biscuits below), you’ll probably want to do that right before your meal.

Almost any “cold” pie or dessert can easily be made the day before and refigerated until after your meal — in fact, they often taste BETTER when allowed to sit overnight.

NOTE: If you prefer warm fruit pies, just place them on cookie sheets and pop them into a 250º oven for roughly 20 minutes.

These are some of our favorite cold pies and desserts.

Here’s an idea of what I do on each day leading up to Thanksgiving Day.

Along with making all my food in advance, here are a few additional tips and tricks I use to simplify my holiday gatherings.

The first thanksgiving was in the Fall of 1621 and included roughly 50 Pilgrims and 90 Wampanoag Indians. It was said to have lasted 3 full days. Apparently only 5 women were present as many of them were unable to survive the difficult first year.

There was no turkey on the first Thanksgiving — it was most likely venison, ducks, oysters, lobsters, eel, and fish. They most likely DID eat pumpkins — but not as pie.

Thanksgiving became a national US holiday in 1863, thanks to Sarah Josepha Hale (writer of the classic song, “Mary Had a Little Lamb”) who apparently convinced President Lincoln after 17 years of faithfully writing letters campaigning for this to happen.

Thanksgiving is said to be the reason for the introduction of TV dinners in the 1950s. Apparently Swanson had more than 260 tons of extra turkey in 1953, and a salesman suggested that they should package it into aluminum trays with other sides like sweet potatoes.

NOTE: These “fun facts” are from our local Library — I don’t have an exact source. 😉

In case you’re wondering, I won’t be out shopping on Black Friday 🙂